‘Work had to be done by election’ 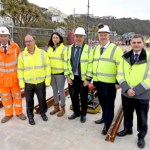 Department of Infrastructure officers were told the promenade regeneration had to be finished by the next election, Tynwald has heard.

The first report of the committee looking into the regeneration scheme was received at the October Tynwald sitting.

Committee member Chris Robertshaw (Douglas East) told members that during a briefing on the much criticised scheme, a ’courageous’ officer had ’effectively said: “We were told it had to be done by the election”.

Mr Robertshaw added: ’That has told us that effectively we applied a loose political decision to a massive project because it suited political re-election. Shame on us.

’Look at the damage that decision created amongst many people.

’People who have lost their savings, who are losing their businesses, whose health has been damaged.’

He said that the committee had ’tried to establish’ where the two-year time frame came from and even spoke to former DoI ministers.

Mr Robertshaw added: ’There is absolutely no evidence that we could find that officers involved in this advised the minister that it needed to be done or could be done within two years.’

Mr Callister asked: ’Why did the minister stand up in this court and say that he could deliver it within two years?’

And he pointed to DoI previously saying it would take four to five years to do the work.

He said that members had ’hamstrung’ the DoI with decisions being made that included work not starting before 9am and not working into the night.

Mr Perkins added that the decision to continue with the horse tram corridor meant all members had to share collective responsibility over the work.

He also said that the works were like ’toothache’ that ’had to be put up with’ however things would improve.

’We will get through this and it is important we all stick together and get the project done without too much criticism,’ Mr Perkins added.

Mr Harmer told Tynwald that this government had ’grabbed the nettle’ by taking on the promenade works and suggested that the time frame was to ’honour the promise’ of the programme for government to see the work completed during this administration.

He added: ’We didn’t set the construction timetable of two years, it was jointly agreed with the contractor [Auldyn] and we built in penalties for delay.’