What should the new TT races scoreboard look like? 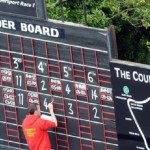 That’s the question being asked by government officials – and they want people to give their views before they make a decision.

The scoreboard, which is opposite the TT grandstand on Glencrutchery Road, Douglas, is deteriorating.

It was originally a mobile structure and incorporated into the current permanent structure in the late 1980s.

The Department for Enterprise, under whose remit the TT comes, says the condition of which has gradually deteriorated. It carried out significant works in 2018 to extend its operational life.

’Subsequent to this work, the condition of the scoreboard is now such that planning for a replacement of the existing structure is a priority,’ a spokesman said.

Rob Callister MHK, the politician with responsibility for tourism and motorsport, said: ’The scoreboards are important to many people. They provide valuable information to spectators and teams alike.

’The department is fully aware of the place the scoreboards have in the history and heritage of the island, so we are looking for views and ideas from the spectators, fans and the general public as to what the replacement should be.

’This may be simply replacing like for like, or creating something new that incorporates modern technology. The department is fully open to exploring all ideas and suggestions.’

The consultation runs from December 13 to January 31.