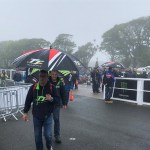 MHK keeping an eye on issues

An MHK says there are a few factors which could have a negative effect on the number of people who come over for the TT this year.

Motorsport political member Rob Callister made the comments while speaking to Manx Radio about the latest visitor figures for the TT and Festival of Motorcycling.

In 2019 the former saw a 4% increase on the previous year, while the latter experienced a 2.5% rise.

It’s often the case though that when there’s bad weather one year, as there was at TT2019, the following year sees a dip.

Mr Callister thinks that, along with some issues, could have an impact on TT2020: