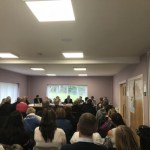 Onchan Commissioners have warned that the village’s infrastructure could not cope with 200 new houses proposed in the Area Plan for the East.

At a meeting with residents, all the board members of the local authority spoke to state their objections which were met with support from villagers.

The meeting was held ahead of the deadline for submissions to the Area Plan for the East last Friday.

However, some local authorities, including Onchan, had been granted extra time for submissions by the chairman of the public inquiry, Michael Hurley.

The major focus in Onchan is Ballachrink Farm, where 200 homes are proposed to be built on land at the top of Birch Hill and numbered OH01 on the area plan.

Chairman of the local authority Robin Turton opened the meeting by reminding residents that if they don’t want the area plan to be accepted, they needed to not only put their submissions to the commissioners and Mr Hurley but to ’petition your MHKs’.

Mr Turton added: ’The inspector isn’t going to make the final decision, he will only make a recommendation and that will be voted on by Tynwald members.’

Members of the board were asked by one attendee for their thoughts.

Each commissioner spoke in turn to reject the plans, including Derek Crellin who said he opposed the plans for a new estate in Onchan the last time it was proposed and ’nothing has changed’.

Mr Crellin said his major objections came from infrastructure concerns. He told those in attendance that ’Birch Hill could not cope with 200 new cars’ and that he doubts the village’s sewage system could cope either.

He also accused the Cabinet Office of ’not putting a lot of thought’ into the Ballachrink Farm zoning given those difficulties and said, to the applause of the residents who attended the meeting, ’I don’t think we need a major development’.

Fellow board member Kathryn Williams said that if the island’s population is to grow and the economy to continue to be prosperous, ’people have to live somewhere’. But she added: ’We need to ensure areas are not over-populated.’

One woman who attended the meeting said that there ’are still a lot of unanswered questions’ including ’how did the government come up with these population figures’?

Mr Crellin said she had raised an important point and he was ’not sure what planet the Cabinet Office are on’.

Onchan MHKs Julie Edge and Rob Callister both spoke to tell residents to continue to write to their local authority and to them or the Garff MHKs Martyn Perkins and Daphne Caine.

Mr Callister said that he believes whatever the Cabinet Office takes as the final recommendation from Mr Hurley’s report, it will be ’forced through’ by the Council of Ministers’ block vote.

However, Mr Turton challenged that and said ’between yourselves [Ms Edge and Mr Callister], Garff and Douglas, we have our own block vote of MHKs’.