Village welcomes the return of a bus shelter 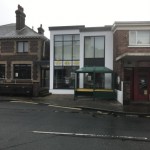 Onchan residents have a new shelter to wait in for buses heading into Douglas.

The stop outside Bonds restaurant, formerly the Isle of Man Bank, had been without a shelter for some time.

The old one was removed to allow for the redevelopment of the building into a restaurant, flats and shops.

As we reported in last week’s Manx Independent, a replacement shelter, designed by Gold Properties Ltd.

However, after the skeleton of the shelter was put up, it drew the ire of residents, the commissioners and MHKs.

They all said the shelter was not going to work and questions were raised over a seat that was too high and whether disabled people would be able to get a wheelchair into it.

The bus stop was then removed and a sign was stuck up saying it that ’further works are to be undertaken shortly to lower the seat and to install glass panels’.

However, the Department of Infrastructure told the Examiner it would be installing a standard green shelter.

A DoI spokesman said: ’The department was willing to allow the developer to install a shelter of a different design so long as the needs of passengers were met.

’Unfortunately the developer has to date not been able to meet this requirement so the department will now install a conventional shelter to replace the one that was removed as part of the development scheme.’

The news of the traditional bus shelter being reinstalled has been welcomed by both of the village’s MHKs. Julie Edge said she had ’worked hard as a member for the DoI’ to ensure the bus shelter is in place.

Ms Edge added: ’The DoI do not require planning for their shelters and it is the best outcome for our Onchan residents to ensure appropriate seating and protection from inclement weather.’

Her constituency colleague Rob Callister added: ’I am pleased that the matter relating to the bus shelter outside the Bonds restaurant has been finally resolved.

’This particular bus stop has significant footfall especially in the winter, so it is vitally important that any bus stop provides and elements shelter for Onchan residents during the winter months.’

It is now understood that the DoI has reached an agreement with Bonds to rotate the bus shelter to its former position facing towards Ramsey.