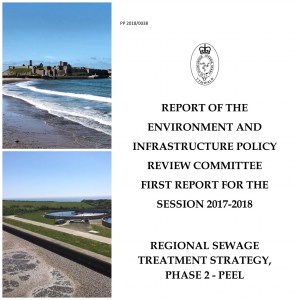 I rise today to ask this honourable Court to approve the Recommendations of the Environment and Infrastructure Policy Review Committee’s first report for this session.

This Report results from our investigation into Phase 2 of the Regional Sewage Treatment Strategy.

Mr President, I won’t go into the details of the very long history of the project to modernise the Island’s sewerage system here today.

It is fair to say that it has been in progress for almost 30 years.

In short, initially the plan was for a centralised solution, pumping all the Island’s sewage to a single treatment works for disposal at sea. This project was known as the IRIS Scheme or Masterplan, and it began with connecting Douglas and the South to Meary Veg, the proposed central sewage treatment works.

This all changed in 2009, when Tynwald voted in favour of a regional approach with smaller local sewage treatment works, mainly because it was said to be cheaper than the centralised system.

This plan became known as the Regional Sewage Treatment Strategy.

Phase 1 of the Regional Strategy has now been completed, perhaps most notably providing Ramsey with sewage treatment for the first time.

This means that Peel, Laxey and Baldrine are now the only places left on the Isle of Man without any form of sewage treatment.

They will be the focus of Phase 2 of the Regional Strategy.
This Report examines the question of whether a regional sewage works is appropriate for Peel.

We explored this question from a number of angles.

We asked whether a regional approach was best in financial terms, in other words the cost to the taxpayer. We asked whether it would deliver the best outcomes in terms of the effect on the environment and public health. And we also asked what the impact on local business would be.

Our first recommendation addresses the financial cost of the regional approach.
Mr President, this recommendation quite simply reflects the fact that the MUA were not able to convince us as a Committee that a regional sewage works would cost significantly less than connecting Peel directly to Meary Veg in Santon.

Because of the need for commercial confidentiality, we’ve only been able to focus on the operational costs in our Report. Nevertheless, there were a few areas that gave us cause for concern.

For instance, we heard evidence that raised question marks over the estimated operational costs of the centralised system.

We also discovered that the regional works in Peel, St John’s and the Central Valley may quickly become undersized, meaning additional capital and operational costs in the near future.

In summary, we do not believe that the basis for comparison of the centralisation option and the regional strategy is as equal as it could and should have been.
For this reason, our only option was to recommend that the costs be subject to further scrutiny.

Mr President, I am pleased to see that a redacted version of the independent review commissioned by the MUA has now been published in time to inform our debate today.

As I explained in response to a Question in this honourable Court a couple of months ago, the Committee received a copy of this report on 14th February 2018, almost a year after we had begun our investigation.
We were asked to keep the report confidential, and so we couldn’t include it or its findings in our Report to Tynwald. In any case, as I also explained at the time, its findings did not change our perspective on the matter, and they still do not.
In fact, the review confirms our suspicions that the scales have been weighted, perhaps inadvertently, in favour of the Regional Strategy.

For instance, Page 23 of the MW Barber Associates Limited independent Review Report dated February 2018 in which Mr Barber considers that, and I quote, ‘As a Consequences I consider that for the purpose of providing an appropriate risk assessment of the Infrastructure to be provided, this review considers that the option requiring lining of the existing outfall and extension of the outfall by a further 230m is the most appropriate option to consider for estimating and for strategic review purposes’.

This is an option that makes the capital and maintenance costs of the Regional Strategy much more expensive, and we would therefore argue that it makes a more useful basis for comparison and budgeting purposes.
Mr President, we also have some concerns about how independent the review really is.
Mr Barber explains that he was the project manager of the strategic review undertaken by Mouchel Parkman in 2007. Mr President, this was the very review that recommended the regional approach to Tynwald Court in 2009. It was also found to contain a number of errors.

I think it would be useful if the Chair of the Manx Utilities Authority, Dr Allinson, could explain to this honourable Court the process through which Mr Barber was selected to undertake the review.

Mr President, it is for honourable Members to decide if they are content with the redacted findings of the review put before them today. If they are, they should vote against an independent review of the costs of a regional works in Peel.
For my part, I believe that the costs should be subject to further independent scrutiny.

I would therefore urge honourable Members to support Recommendation 1 of this Report.

Our next 5 recommendations deal with environmental and public health issues.
Recommendation 2 addresses our concern that building a regional sewage works in Peel without an adequately extended sea outfall pipe would involve too many compromises and pose potentially significant risks.

Peel Bay has a clockwise tidal eddy, which means that whatever enters the bay takes a long time to leave. For that reason, the consultants Hyder recommended that the sewage effluent should either be treated by UV treatment or that the outfall pipe should be extended.

During our investigation, the MUA did not appear to be convinced by either recommendation. They had already ruled out an extension to the outfall pipe on grounds of cost, and their plans for UV treatment at the works were not entirely clear.

I note from the Council of Ministers’ response to this Report that the MUA has now agreed to provide year-round UV treatment at the Peel works, but only if deemed necessary.

We are particularly concerned about what will happen during storm conditions. When there is heavy rainfall, untreated sewage will continue to be discharged into Peel Bay.

Mr President, the Government’s own laboratory tests show that heavy rainfall is associated with poor quality bathing water in various locations around the Island.
We have been told that storm discharge of this sort is predicted to happen in Peel around three times during the summer months, and it could take up to six hours for it to dissipate. As we understand it, the outfall pipe at its current length could be inadequate in those circumstances.

The Council of Ministers think that this is an acceptable risk. I do not think that it is. I would therefore urge honourable Members to support our recommendation.
Recommendation 3 deals with the plans for sewage treatment in the Central Valley.
A major consequence of the decision to pursue the Regional Sewage Treatment Strategy is that treated sewage will continue to be discharged into rivers along the Central Valley, rather than being pumped back to Meary Veg.

Rivers are clearly much smaller bodies of water than the sea, and so the effluent discharged into them is subject to much more stringent requirements.

We were therefore surprised that there weren’t any plans for anything beyond secondary treatment at the replacement works along the Central Valley.

Our third recommendation speaks for itself[, and we are happy to support the Council of Ministers’ proposed minor amendment to this recommendation].
Recommendation 4 concerns the well-known problem of the Raggatt leachate, which is currently put through the sewage system in Peel.

As far as we are aware there is no guarantee at present that a regional works will be able to treat the leachate. However, we are encouraged by the MUA, DOI and DEFA’s efforts to solve this problem.

It is vitally important that the Raggatt leachate is not forgotten about during the development of any sewage works in Peel, and so we welcome the Council of Ministers’ commitment to this principle.

Recommendations 5 and 6 seek to give greater clarity to the Island’s current bathing water quality standards.

Tynwald resolved in March 2016 that the standards of the 2006 EU Bathing Water Directive should only be considered as an ‘objective’.

As a result, we are still complying with the standards of the 1976 EU Bathing Water Directive.

Mr President, these standards no longer exist. The world has moved on a lot since 1976. I believe that we can and must do better than simply ‘aspire’ to the 2006 standards as an ‘objective’.

We must now begin to work towards the formal adoption of these standards.
The Council of Ministers’ amendment to recommendation 5 suggests that they believe that the 2006 standards should remain only an aspiration.

I would therefore urge honourable Members to support both Recommendations 5 and 6 as printed on the Order Paper.

Recommendation 7, our final recommendation, is that any major infrastructure project should be accompanied by a wider economic impact study.

Mr President, for a long time the preferred site for the proposed sewage works in Peel was next to ‪the Power Station‬ and, more importantly, the Food Park.

We heard evidence from Mr William Caley, director of Isle of Man Seafoods, the largest employer in the Food Park.

He told us about the impact that a nearby sewage works could have on his business and the Manx seafood industry as a whole.

Mr President, Mr Caley had received no clear guidance from either DEFA or the MUA on this matter. We understand that it would have been difficult to hold a formal consultation or even offer reassurance when the site in question was not in Government ownership.

But nevertheless, the site near the Food Park was the preferred site for a long time, and we feel that there could have been better communication with the businesses potentially affected by the sewage works.

This failure to communicate is yet another example of the silo mentality that my honourable colleague Mr Robertshaw often talks about.

The MUA now owns the site known as Glenfaba House, which is near the Raggatt just outside of Peel.

This site may be sufficiently far away from the Food Park not to cause any problems, but we await with interest the results of the formal consultation.
Mr President, this is why we feel that a wider economic impact study for major infrastructure projects such as this one would be a beneficial addition to the process.

Although the Council of Ministers believes that the current process is satisfactory, it clearly hasn’t worked in this particular case. I would therefore urge honourable Members to support Recommendation 7 and give their backing to this important principle.

Mr President, the recommendations of our Report reflect our desire to futureproof both the Island’s sewerage system and the Island in general. We fully appreciate the need to keep the financial costs of this vital and long-awaited infrastructure project under control. Nevertheless, we do not believe that this should be at the expense of the environment, public health, or the local economy.

Mr President, I beg to move the motion standing in my name.