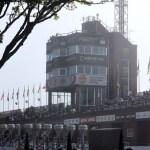 There was a combined estimated visitor spend of almost £50m, resulting in a contribution of over £35m to the local economy.

The latest survey into the 2019 Isle of Man Festival of Motorcycling revealed that over 16,000 visitors attended the Classic TT and Manx Grand Prix in 2019, representing a year on year increase of almost 3%.

It also showed a significant increase in the number of visitors by air – over 1,200 compared to the previous year, while the length of stay also increased.

Combined the two events attracted over 2,000 additional visitors to the Island compared with 2018, bringing the total to over 62,000 visitors in 2019.

Key findings of the 2019 Isle of Man Festival of Motorcycling study are:

Laurence Skelly MHK, Minister for Enterprise said: ‘The growth in visitor numbers and significant increase in the economic contribution clearly demonstrates that we now have a strong late summer motorcycle race series that sits alongside the TT Races and one that makes a major contribution to the year round local visitor economy.

‘The two events now have their own identity and we therefore no longer need to use the overarching ‘Festival of Motorcycling’ brand. This move will allow both events to clearly promote to, and communicate with, their target audience – in the case of the Manx Grand Prix to create a stand-alone identity and profile as the meeting heads for its centenary in 2023.’

Rob Callister MHK, Political Member for Visit Isle of Man and Motorsport, added: ‘The strong partnerships that now exist between the public and private sector, as well as the many volunteers, underpin the successful delivery of our events and I am confident that our strong working relationships will allow us to further develop and grow the events for the benefit of the Island’s residents and racing fans worldwide.’

The Festival of Motorcycling 2019 Survey is available here and the full TT Visitor Survey 2019 here.