There are ‘polarised views’ of DHSC says Callister 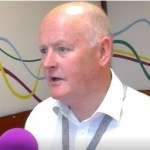 The new health and social care minister admits he thinks there are ‘polarised’ views of his department from residents.

Mr Callister has described his first days in the job as a ‘steep learning curve’.

But he says he’s committed to working with Manx Care to address any concerns which have been identified with the health system: