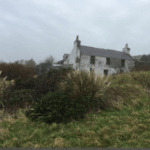 A campaign has begun to overturn a planning decision to allow the demolition of a traditional Manx cottage in Niarbyl and replace it with a flat-roofed structure almost twice the size.

It comes after Rob Callister MHK – as a member of the government department responsible for planning – overturned the decision of an independent planning inspector to reject the plans for an energy-saving style property on the site of the 160-year-old cottage Ballacain.

Robert Husband, who lives next to the property, said: ’The astounding and disgraceful thing is that the independent inspector agreed with our appeal and recommended that the planning approval be quashed. This is normally by far the most difficult hurdle to clear.

’In 99% of cases this recommendation would be adopted by the Department of Environment, Food and Agriculture minister, or the person to who the decision was delegated (in this case Rob Callister) and the planning permission would be refused.

’This is a very sad situation for the Isle of Man, and particularly for those people who treasure the unique landscape.’

Mr Husband was one of numerous objectors to the plans, including Peel and Glenfaba MHK and Infrastructure Minister Ray Harmer. Another objector throughout the planning application was Bill Dale, a previous owner of the property, who owns land alongside Mr Husband’s cottage.

Mr Dale said: ’My objection was strongly based on being a Manxman wanting to preserve the identity of the Isle of Man and to do my utmost to prevent a classic traditional Manx cottage being replaced with a truly enormous, soul-less wooden clad flat-roofed box, whether it has eco-friendly systems or not.

’I see the proposed development of this property in such a way as fundamentally against everything that the island stands for. We must preserve and protect – and even consider “eternal protection” – for such properties.’

Mr Dale said that he was told by the planning department that he would never be given permission to demolish it, and that any extensions and changes had to be sensitive to history and the landscape.

’I completely agreed,’ he said. ’I had no issue in renovating the property in a way which was fully approved across the board – by local residents and the planners.

’I hope that everyone in the Isle of Man who wants to preserve our identity will join in this campaign to have these plans overturned,’ he said.

An independent planning inspector, Michael Hurley, was appointed to give a ruling on the plans when an appeal was launched during the summer, after the original plans were approved by the planning committee.

Mr Hurley said: ’I consider that the enlarged footprint and mass of the proposed replacement dwelling would detract from the open character of this sensitive area of high landscape value, contrary to the objectives of Housing Policy 14 and Environment Policies 1 and 2 of the Strategic Plan.’

However, Mr Callister took the unusual decision to reject Mr Hurley’s recommendations and planning permission was ratified in November. To overturn this decision, objectors are now required to submit a Petition of Doleance to the courts.