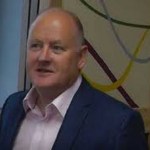 An MHK elected for a second term in the House of Keys isn’t ruling out taking up a ministerial role in the new administration.

Rob Callister topped the standings in Onchan, with 1,600 votes, retaining the seat he first gained in 2016.

Mr Callister has held a number of government roles since being voted in.

When asked by Manx Radio if he’s targeting a ministerial post he insisted constituents remain a priority: