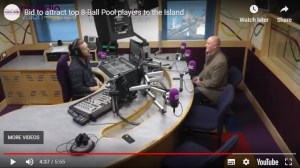 Following the success of Manx eight-ball pool player David Addinall, in his first season on the International Professional Pool Players’ Association circuit, an MHK is bidding for the Island to host one of the IPA’s ranking events.

Rob Callister, who has been a top cuesports player himself, went on a self-funded trip to watch the IPA World Championships in Bradford earlier this month and speak with the committee about the possibility of bringing the tour to the Island in the future.

Mr Callister told Dollin Mercer whilst the decision was out of his hands, there were promising signs so far: