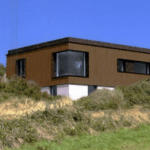 The former owner of a Manx cottage in the west of the Island hopes the decision to demolish and replace it with a more modern structure will be overturned.

Bill Dale, who previously owned Ballacain in Dalby, says support for the proposals is ‘wrong’ and needs to be looked at again.

Mr Dale, who plans to submit a petition of doleance to the courts, hopes the approval will be overturned: