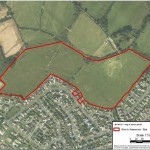 No need for it, inadequate infrastructure and access, and flooding issues – an Onchan MHK has been outlining his objections to a housing estate earmarked for his constituency.

The draft Area Plan for the East, as it currently stands, has a site near Cronk-ny-Mona down for development.

Rob Callister has submitted evidence to the upcoming inquiry into the plan.

He’s worried Onchan’s concerns may get swallowed up within the rest of the evidence, given how the inquiry is being conducted.