No increases in bus fares 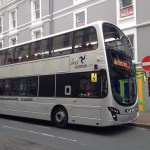 The government will continue to hold bus fares at the April 2013 level for as long as possible despite inflationary pressures.

The remarks were made in the House of Keys by infrastructure minister Tim Crookall, who said that so far, ‘inflationary increases have since been covered by the increasing numbers of bus passengers’.

Mr Crookall added: ‘It is difficult at the present time to predict what further increase in fuel prices may occur, but we will continue to monitor and only increase fares if we need to’.

Onchan MHK Rob Callister had asked what consideration had been given to capping fares.

‘Tickets are also available for 28 days and for a year, and all, I would say, at excellent value compared to use of a car and car parking prices.’

Before the pandemic, between 2010/11 and 2019/20 there was a 52% increase in bus travel. During the pandemic, bus usage plummeted due to the significant reductions in services. Those that remained in place were intended to be used by key workers on a reduced timetable.

Activity picked up markedly during summer 2020 as the island began to unlock from restrictions, and people took the opportunity to explore the Isle of Man whilst off-island travel was tightly restricted.

‘It is hoped that further increases in passenger numbers may be achieved, reflecting the pressure on family budgets and our environmental aims of reducing car use – that could just be a side effect,’ Mr Crookall said.

He added: ‘Despite increases in fuel prices, I will try to resist a fare price [rise] as long as possible, and will look to alternative ways to encourage passenger use’.

Mr Callister then asked whether cheaper fares would be considered to help get people through the cost of living crisis, as well as to encourage people to use public transport. Mr Crookall responded that the department was ‘absolutely at the moment looking at ways of encouraging people, and that would probably include bringing the prices down’, but that ‘the huge cost implication’ needed looking at.