No fines ever issued to those breaking hosepipe bans 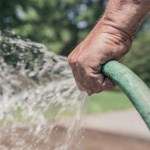 The chair of Manx Utilities has admitted no fines have ever been handed out to people ignoring previous hosepipe bans.

One’s being introduced from just after midnight on Friday, after it was revealed the Island’s reservoir stocks are currently at 70 percent.

Anyone caught using their hosepipe after that could face a fine of £2,000.

Rob Callister says it’s credit to the Manx public that none have ever been issued: