No change in Onchan 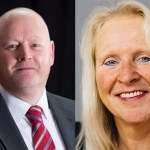 There’s no change in Onchan as Rob Callister and Julie Edge have been re-elected.

Both have been returned for a second term in the House of Keys, having first been elected in 2016.

Mr Callister topped the poll with 1,600 votes, and is calling for all elected members to work together:

A total of 2,346 ballots were received with 11 papers spoilt.

Turnout in the constituency was 45.05 per cent.