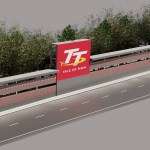 A new, replacement TT scoreboard on Glencrutchery Road will ‘hopefully’ be ready for next year’s races.

That’s from the MHK with political responsibility for motorsport, Rob Callister.

The Department for Enterprise is submitting a planning application today (Friday, 4 March).

The previous scoreboard, built in the 1980s, had to be taken down in November 2020 due to structural issues – a temporary board will be in place this year.

The new plans have been drawn up following a public consultation and will include screens to stream the live television broadcast.

It’s expected to be funded from existing DfE budgets, once costs are fixed, and work begin after the 2022 Manx Grand Prix.

Mr Callister spoke with Lewis Foster about the plans:

Manx National Heritage now possesses parts of the previous Scoreboard – due to feature as part of the Manx Museum’s new TT Gallery in 2023.