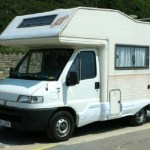 Traffic wardens could have their powers extended under new legislation planned by the Department of Infrastructure.

Currently, only police can issue fixed penalty notices for overnight and weekend waiting provisions, but that’s set to change this autumn.

The department will also amend the regulations, to make it clearer what vehicles they apply to, in ‘plain language’ so there’s less ambiguity over which vehicle types are covered, including motorhomes.

Minister Ray Harmer revealed the plans in response to a question in Tynwald this week, specifically about motorhomes, from Rob Callister MHK.