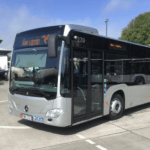 The offer of 18 free bus journeys in and out of Douglas have been snapped up by 265 residents, Infrastructure Minister Tim Baker has told Tynwald.

Residents of Onchan and parts of Garff are able to obtain free tickets from Bus Vannin as a concession after new traffic arrangements led to congestion in Onchan and at St Ninian’s crossroads.

In response to a question from Jason Moorhouse (Arbory, Castletown and Malew), Mr Baker revealed that 189 Onchan residents have taken up the offer, with 15 tickets issued to Baldrine and 61 to Laxey.

Mr Baker, again in response to a question from Mr Moorhouse, said the total value of travel of the passes was £6,283. With cards, which are issued as tickets, being valued at £2 each, the move to offer free bus travel to those affected by the rush hour congestion is £6,813.

The idea for the bus passes came from Rob Callister (Onchan) who has recently joined the Department of Infrastructure on an interim basis.

When the scheme was first introduced, Mr Baker said: ’The tickets will be for use in peak hours, if residents in these areas want to use one free journey a day, they can, in effect, commute for half price for up to a month.’

Currently, the only main route for a motorist to go from Laxey to Douglas is through Governor’s Bridge, along Glencrutchery Road and down Ballaquayle Road. Soon Church Road Marina will close too leaving Victoria Street as the only main route onto the promenade.

However, the DoI chose not to do this.