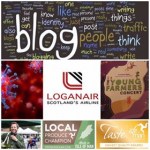 In the House of Keys on Tuesday morning, the DOI Minister, Ray Harmer, MHK announced that Loganair was to operate two daily flights between Isle of Man and the Liverpool from Thursday morning.

The Loganair aircraft being used is a Saab 340, which only has a seating capacity of just 33 or 34, so this announcement will not ease many of the ongoing concerns being raised around tickets prices or re-establishing the Manchester and Birmingham routes that this island needs as a matter of urgency.

On the other hand, it does mean that Patient Transfer Passengers travelling to the North West for hospital appointments or treatment will be given priority on the new route, which is excellent news, especially when the alternative was a longer journey via the Steam Packet Company.

On Friday the Environment and Infrastructure Policy Review Committee took evidence from Ray Harmer, MHK who confirmed that an announcement was pending, possibly as early as next week. Hopefully, we could have the Manchester and Birmingham routes back up and running by the end of the month.

The Coronavirus (Covid-19) continues to raise serious concerns amongst a lot of people and I am extremely grateful for everyone that has contacted me over the last week with their own questions and concerns.
Criticism around a lack of information from central Government is coming through strong from Constituents, but this is a unique set of circumstances, which is changing by the day, if not by the hour.

I do genuinely understand people’s concerns, but we have to continue with our daily lives and to follow the general advice being issued by the island’s Public Health team, and to take any instructions seriously.

In the UK more than 800 cases have now been confirmed and that figure continues to rise daily. Here on the Isle of Man there have been 29 tests concluded and no confirmed cases so far, but I would still guide people to the Isle of Man Government’s own Coronavirus website, which gives the latest information and advice from the UK and the Isle of Man on hygiene, travel, testing and transports etc:
https://www.gov.im/coronavirus

Let’s move on. Although I did have engagements over the weekend, I still ended up working for a few hours on various things.
I was back in the office for normal time on Monday for what was going to be a very busy week ahead.
The first hour was spent working on the Area Plan for East, which included drafting correspondence to the Cabinet Office. I then headed back into Onchan for a couple of Constituent meetings relating to a medical issue and some general advice relating to an employment disciplinary.

There are occasions in this role when you listen to someone’s situation and you know that you are powerless to help. I faced such a situation on Monday morning when I met up with a Constituent to discuss their particular medical circumstances, but unfortunately the island’s “Limitation Act 1984” restricts any time limit for action in respect of personal injuries to just three years.

It’s fair to say that particular meeting affected me for the rest of the day, especially when I wanted to do so much more.

I then headed back to the office to park the car before walking over to the General Registry for the first of two meetings involving all DfE staff, which the political members were also invited to attend, although I did feel slightly out of place at times….

The meeting gave Department heads an opportunity to update colleagues on the work being undertaken in other sections within the Department, which included a Q & A session at the end.

Back to the office at lunchtime and fortunately for me a training session for Tynwald Members was cancelled, which gave me opportunity to draft a short speech for an event being held in Ramsey later on in the day.

Just before 15.00 I headed up to Manx Radio to do two interviews relating to my three emergency questions in the House of Keys on Tuesday in respect of Flybe and the Patient Transfer service.

From there it was down to the Sea Terminal for the Political Oversight Board meeting relating to the Douglas Promenade Scheme. I then headed home just before 17.00 in order get changed and then to drive down to Ramsey for the Taste Awards 2019, which was being held at the Park Hotel from 18.00.

The Harvest Isle of Man scheme has also been re-branded this year, in order to allow qualifying eateries to become a “Local Produce Champion”, which awards those eateries that use at least 80% or more local produce.

The guest speaker for the evening was chef Oliver Rowe, who is best known for featuring on BBC2’s “the Urban Chef”, which followed his search around London for local suppliers to provide high quality seasonal produce for his restaurant.

It was an excellent event and I finally got home for around 22.00, but I still needed to draft a couple of emails before finishing.

Another sleepless night on Monday evening that resulted me being up and about from around 4am, but it did give me an opportunity to draft a few supplementary questions ahead of the House of Keys sitting.

I went into the office well before 8am on Tuesday in order to continue preparing for this week’s sitting, which got underway at 10am with 5 emergency questions on the collapse of the Flybe airline that attracted some media attention and the public gallery was also relatively full.

On the main question paper there were 9 oral questions and 7 written questions, along with two bills for first reading, the Road Traffic Legislation (Amendment) Bill 2020 and the Elections (Keys and Local Authorities) Bill 2020, before members considered the clauses of the Bank (Recovery and Resolution) Bill 2020.

The sitting finished just around 12 noon, which gave me an hour to start going through the DfE agenda pack before going up to the Barrool Suite for a briefing on Coronavirus and on current International Matters including an update on the Brexit negotiations from the Chief Minister, Howard Quayle, MHK and Peter Boxer Executive Director, in External Affairs.

That briefing lasted almost two hours and the rest of the afternoon was spent desperately trying to respond to an ever-expanding inbox. Concerns around Coronavirus together with the collapse of Flybe and the over pricing by EasyJet at the moment has sent my inbox into overdrive.

I left the office just after 17.00 but once home I still needed to respond to the last few emails and continuing working the Area Plan for the East project and to finish off going through the PAC and DfE agenda packs, along with a couple of DfE Department papers until around 22.15.

Wednesday was the usual routine of attending a DfE Political meeting with the Minister, Laurence Skelly, MHK at 9.30am before the Department meeting that started with the Agency update.

The Department meeting finished at lunchtime, which gave me an hour to finish off any work relating to the PAC’s Committee meeting that started at 14.00, in which the Committee had a private evidence session with a Minister.

Back to the office for the last 30 minutes before heading home at 17.15, but I still needed to work on the Area Plan for the East project until around 20.30, along with drafting some correspondence.

Things were a little quieter on Thursday morning, with my first meeting not scheduled until 10am, which gave me time to start looking at the Environment and Infrastructure Policy Review Committee evidence session being held with the DOI on Friday morning.

At 10am Chris Robertshaw, MHK, Martyn Perkins, MHK and I had a meeting with Terry Liddiard who most people will know as the ex-managing Director of Manx Airlines.

Given current events around the collapse of Flybe and Open Skies, it was great to get the thoughts of Terry. It was an excellent discussion, until the fire alarm went off and we had to clear the building.

I was then able to have a coffee and a toasty with a good friend before heading back into preparing for the Environment and Infrastructure Policy Review Committee session until around 14.00.

At 14.30 there was a House of Keys sitting to elect four new members for the Legislative Council, and the whole sitting lasted less than 30 minutes and required just one round of votes.

In the end Kerry Sharpe (19 votes) and Bill Henderson (15 votes) were re-elected along with Rob Mercer (13 votes) and Peter Greenhill (14 votes).

I wish the new MLC’s all the very best for the next five years.

Happy to confirm that I voted for just three members: Kerry Sharpe, Rob Mercer and Michelle Haywood, who was unsuccessful on this occasion.

One candidate received no votes, which might raise a few eyebrows, especially when you need to be nominated, have a seconder and two supporters to stand any chance of being elected.

As for the rest of the afternoon, we spent it in the office until around 17.00 at which time a number of backbench MHK’s headed down to Coast for tea before going to the Young Farmers Concert being held at the Gaiety Theatre.

A fantastic night with some great company – the Young Farmers Concert was amazing and very hard to split three of the teams, but in the end I went with the Southern Concert as my personal favourite.

In the office well before 8am on Friday to continue preparing for the Environment and Infrastructure Policy Review Committee that got underway at 10am with a pre-meeting of the Committee.

We then went into the Legislative Council Chamber to have our annual session with the Minister for the Department of Infrastructure Ray Harmer, MHK and the CEO, Nick Black.

I was back at my desk for 12.30 to start working on the Tynwald Order Paper, which looks a very light paper.

Just before 15.00 I had a private appointment, so I didn’t actually get back to the office until around 16.30 to catch up with a few things.

As for the weekend, we have the Isle of Man Darts Open on at the Villa Marina and I also have a couple of constituency events, but I will give further details next week.