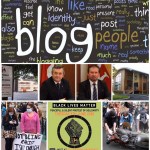 On Tuesday this week a protest march was held in Douglas as part of “Black Lives Matter”, which is an international human rights movement that campaigns against violence and systemic racism towards black people.

Over the last couple of weeks there have been thousands of protests across the world after a Minneapolis policeman, Derek Chauvin knelt on an unarmed black man, George Floyd’s neck for almost nine minutes whiles he was being arrested on 25th May.

Mr Floyd died from his injuries and this has led to global protests and calls for police reform after the whole horrific incident was caught on camera and televised.

Mr Chauvin is now facing charges of second-degree murder and manslaughter and three other arresting officers are charged with aiding and abetting a murder, and all four police officers have since been fired, and rightly so…

In the UK there were several protest marches that got out of hand with protesters pulling down a statue of Edward Colston who was a merchant and slave trader in the 1600’s, dumping it into the Bristol harbour. A statue of Winston Churchill was also defaced in London; and in the USA protests turned into rioting and looting, which resulted in a number of people being killed when protecting property and businesses.

As our own Chief Constable, Gary Roberts wrote this week, the right to protest is a fundamental human right and we must do what we can to allow people to express themselves, even in such difficult times.

I think in the end over 1,500 island residents attended a peaceful protest to show their support, which was great to see.

As for the weekend, Saturday was spent in the shed finishing the new archway that I have built. We just need to put it in the garden once a couple trees have been taken down. No walk on Sunday as most of the day was spent working on a detailed letter to DOI around social housing, which would take up a lot of time this week researching and putting together.

Back on the road on Monday morning in order to get in a quick four miles before 6.30am. A quick change and then into the office for an hour or so to catch up with a few things.

Still home before 9am to continue working on the correspondence to the Department of Infrastructure that needed to be submitted by Friday.

It was also a busy morning on the phone dealing with a number of issues around island residency, benefits, road tax and a housing application, and I also had a number of small tourism related meetings.

In fact, the phone calls and messages didn’t really stop on Monday, but hopefully I was able to help a few people out.

At 12 noon there was the latest Tynwald briefing to Members, and this week it was led by the newly appointed Minister for the Department of Infrastructure, Tim Baker, MHK who provided an update on the promenade scheme and various other projects being undertaken by the Department at the moment.

The meeting lasted around 90 minutes and once the briefing finished I still needed to go through the Home Affairs agenda pack, along with preparing for Tuesday’s House of Keys sitting.

At 16.00 I dialled into the Department of Home Affairs meeting, and although I have only been in the Department for a few weeks the meeting on Monday would be my last. With Tim Baker, MHK taking up the reins as the new DOI Minister it has opened up an opportunity for me join DEFA, which is a Department that I have followed very closely over the past few years.

Having spent my early years growing up on a farm in Andreas and being part of the farming community in the North of the island, I am extremely grateful to the Chief Minister and the DEFA Minister Geoffrey Boot, MHK for giving me the opportunity to transfer from Home Affairs to the Department of Environment, Food and Agriculture.

I am certainly looking forward to the challenges that this particular role in DEFA brings, and hopefully I can help to drive forward the Department’s ambitious programme over the next 18 months.

A massive thank you also to the Home Affairs Minister, Graham Cregeen, MHK for encouraging and supporting the transfer, along with the senior officers at Home Affairs for making me feel so welcome at the Department over the past few weeks.

Once I caught up with correspondence and a few more phone calls, I was able to finish for around 18.30.

Up early on Tuesday to finish off a few things relating to the House of Keys sitting. At 10am the sitting got underway with 7 oral questions and 6 written questions, but the sitting was dominated by the previous Policy and Reform Minister, Chris Thomas, MHK who clashed with the Chief Minister over planning procedure regulation and appeals etc.

Once questions were over we went through the first reading of the Companies (Amendment) Bill 2020 and all stages of the Public Housing Bill 2020.

The sitting finished just after 11.10am.

The rest of Tuesday was either spent working on those projects or going through the DfE agenda pack, along with the extensive agenda pack for DEFA – definitely a steep learning curve and a lot of reading.

I also had to prepare for the next Public Accounts evidence that was being held on Friday morning, but I was able to finish for around 17.00.

Another early start on Wednesday in order to get into the office just after 6am to go through a few things, along with going through a few late DfE papers ahead of the Department meeting.

At 9.30am we had the usual DfE political meeting between the Minister and Members ahead of the Agency updates and then the DfE Department meeting, which had several key decisions and discussions.

Those meetings finished just after 11.40am and from there I went straight into a short tourism meeting before getting changed and heading into the office.

There were a few Tynwald Members in the office and it was good to catch up after being isolated at the house for the last 12 weeks or so. I then dialled into my first DEFA meeting, which related to the agriculture & lands directorate.

An excellent opening meeting and I am looking forward to being involved in DEFA over the next year or so.

Just a few moments to send a few items of correspondence before going up to the Barrool Suite for a joint Treasury and DfE meeting relating to the economic recovery stage after Covid-19. That meeting lasted a couple of hours and social distancing rules, etc were observed. I am sure further details will be put into the public domain by the Treasury and DfE Ministers once the final details have been agreed.

I managed to get home for around 17.00 and after tea I still needed to work on the Public Accounts agenda and evidence session before finishing for around 20.00.

Thursday was a strange day in many ways, I started before 8am continuing to work on the next Public Accounts Committee (PAC) evidence session, along with trying to finish off the correspondence to the DOI.

At 10am Paul Moulton from MTTV called around the house to do a quick interview relating to the TT and tourism, which has already been posted on my social media platforms.

I then continued to work on a few things until 12 noon when I logged in to the PAC meeting, only to be greeted with a strange announcement.

I sit on the PAC due to the fact that I am the Chair of the Environment and Infrastructure Policy Review Committee, which reviews two Departments, DOI and DEFA.

With me moving to DEFA this week that meant that I would have to give up my seat on the scrutiny committee and PAC, which I thought would happen next month in Tynwald when a new Chair was appointed – but that doesn’t appear to be the case unfortunately….

I have enjoyed being the Chair of the Environment and Infrastructure Policy Review Committee and sitting on the PAC over the past four years, but I feel the time was right to allow someone else to take up the chairmanship of that particular scrutiny committee, although I will miss my colleagues and the evidence sessions with DEFA and DOI.

This meant my schedule on Thursday and Friday suddenly was a lot lighter without three or four PAC meetings and an evidence session on Friday morning.

Instead I was able to catch up with a couple of jobs at the house and those ongoing projects, along with dialling into the latest DHSC briefing at 14.00, which lasted around an hour.

The weather on Friday was horrible with heavy rain and strong winds….. I don’t think I have ever been so pleased to see so much rain this week.

Friday was meant to be Senior Race Day and a bank holiday here on the Isle of Man as the curtain comes down on TT 2020, but Covid-19 ensured that the event would be cancelled this year and the Manx Government has moved the bank holiday to August.

If the event actually went ahead as scheduled, then I doubt any racing would have taken place around the mountain course on Friday. Let’s hope this sets the scene for a fantastic TT 2021.

As for my schedule on Friday, it was meant to be dominated by the PAC and a PAC evidence session with the Department of Education, but instead I went into the office just after 6am before to work on that social housing project until around 14.30.

I then had a 90 minute meeting with Tim Baker, MHK as we went through various roles and responsibilities that I will be taking on over the next month or so.

At the latest Covid-19 briefing it was confirmed that the Isle of Man has had no new cases for 23 days, which is excellent news.

As for the weekend I need to finish off my social housing project and prepare for Tynwald next week, but we’ll hopefully find a suitable time for a walk, subject to the Manx weather.