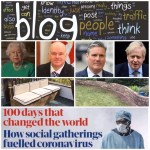 I was reading another article from the Guardian Newspaper this week, which was entitled “100 Days that Changed the World”.

It starts with the celebrations around New Year’s Eve at the end of 2019 when the world was preparing to celebrate a new decade. It continues to write about the obituaries for the 2010’s, which included Brexit, the Syrian civil war, the Refugee crisis, social media proliferation and Nationalism roaring back to life – how our memories forget so quickly.

I doubt many people would remember, and why would you, but at 1.38pm on 31st December 2019, the Chinese Government announced the detection of a “pneumonia of unknown cause” in the area surrounding a seafood wholesale market in Wuhan.

Over the next 100 days, the virus would freeze international travel, extinguish economic activity and confine half of humanity to their homes, along with killing more than 98,000 people by 10th April 2020.

All of this was still unimaginable at the end of December, as 11.59pm ticked over to midnight, fireworks exploded and people embraced at parties and in packed streets.

It is a fascinating article, which also gives a timeline over the last 100 days, but I do wonder how the world will be celebrating at 11.59pm on 31st December 2020?

Given the significance of the last 100 days and excluding her usual Christmas Day message, the Queen has only addressed the nation on four previous occasions during her 68 year resign.

These speeches are normally at times of significant importance and on the previous occasions these have included the Queen’s Diamond Jubilee (June 2012), the death of the Queen Mother (2002), the death of Diana, Princess of Wales (Sept 1997) and during the First Gulf War (Feb 1991).

Last Sunday Her Majesty made her fifth address, in order to respond to the Coronavirus (Covid 19) pandemic. In a stirring address the Queen invoked a wartime spirit, adding that “better days will return” and that “we will succeed”.

In other political news the UK Prime Minister, Boris Johnson has spent most of this week in the St Thomas Hospital in London for routine tests after catching Covid 19 in the last couple of weeks – more on that in a moment.

Another story that has almost gone unnoticed this week because of Covid 19 is the appointment of a new Labour Party Leader in the UK.

Last weekend Sir Keir Starmer, who only became an MP in 2015, secured more than 50% of the ballots cast by members and supporters, in order to defeat Lisa Nandy and Rebecca Long-Bailey to take the leadership.

As for the rest of my weekend, it was a bit of roller coaster to say the least. The first part of the Saturday morning was relatively straightforward and involved Ellen and me putting together the new lawnmower and then me cutting the grass.

I then noticed a couple of missed messages from someone that I knew from a previous employer, but who is also an Onchan Constituent.

The next three hours or so involved me taking him to A & E and then to the Cottage Hospital in Ramsey as he had some serious back problems, but in the end he managed to get a private appointment, which wasn’t available earlier on in the day for some reason….

On Sunday I managed to start cutting back the bank and hedges around the river that runs alongside our cottage. After about 4 hours of hard labour I was full of scratches and cuts, but there is still a lot of work to be done over the Easter Break.

As for the rest of my week, with no briefings and meetings in the calendar there is a lot of uncertainty around how my day will unfold from one moment to the next.

On Monday Ellen and I headed onto the promenade just before 7am for a quick walk before calling into the office briefly to collect a few things.

Once home it was straight into a number of DfE Department papers relating to the TT, Southern 100 and a couple of formal tenders.

I also needed to go through various other Covid-19 papers along with the Tynwald Order Paper for Tuesday, but again most of the day was responding to a continuous stream of messages, correspondence and phone calls.

I answered my last call at 19.00 and responded to the last correspondence at around 19.30.

The economic hurt and suffering from Covid-19 is starting to hit individuals and families across the island, and I don’t believe we will see the full effect of this economic crisis until the end of April or going into May.

I sincerely thank everyone that has called or sent me correspondence over the past couple of weeks, and I must also pay tribute to Andy Stewart from within our DfE team and Julie Bradley from Manx Industrial Relations for their help in answering so many questions and correspondence.

In addition there was also a “Teams” online meeting of a few backbench political members, which lasted around an hour.

At the press conference on Monday, the Health Minister David Ashford, MHK announced plans for the Government to repatriate the Isle of Man residents that have been unable to return during the island “lockdown” that started on 27th March 2020.

Those returning to the island will be placed in quarantine for 14 days at a specially repurposed hotel on the island, which will also follow strict self-isolation procedures that will be supervised.

The 20 cabins on the Ben-My-Cheee will be used to transport residents showing no symptoms of Covid-19, but additional tests will be carried out at the port before boarding.

Once they arrive on the island they will be escorted by the hotel to start the quarantine process. The first sailing back to the Isle of Man will be on Wednesday, 15th April 2020 at 14.15.

It is also worth mentioning that all costs must be met by those returning to the island, including those incurred at the quarantine hotel.

News also broke on Monday evening that the UK Prime Minister Boris Johnson was transferred to intensive care after his coronavirus symptoms worsened.

The Foreign Secretary Dominic Rabb is now the stand-in Prime Minister for the UK.

On Tuesday morning Ellen and I were on the promenade for just after 6.30am for our daily walk. After getting showered and changed I headed into the office to collect some paperwork, before returning home to catch up on various bits of correspondence along with preparing for the Tynwald sitting.

Again, a large section of the morning was taken up fielding questions and correspondence. In fact I was so engrossed in trying to sort out a couple of Constituent issues that I almost missed the start of the Tynwald sitting that got underway at 14.20 with the usual roll call…

As for the second virtual sitting of Tynwald, it started with a statement from the Health Minister, David Ashford, MHK on behalf of the Chief Minister.

This was followed by nine separate Motions brought forward for consideration, but the sitting still finished just before 16.00.

At the daily Government briefing in respect of Covid-19, the Health Minister confirmed that the Chief Minister was experiencing some of the symptoms of Covid-19 and therefore was self isolating at home.

I certainly wish him all the very best in his recovery.

Wednesday morning started with the walk along the promenade with Ellen but I was still able to start work from around 8.30am, in order to prepare for a virtual DfE Department meeting that got underway at 10am.

The meeting started with the agency updates, which was extended considerably as we took on board the feedback from industry sections seriously affected by Covid-19 at the moment, especially around the tourism sector.

That particular discussion lasted almost 90 minutes and the actual Department meeting didn’t start until 13.45, which gave me an opportunity to catch up with emails and calls.

The number of calls I am receiving is reducing, but still a lot of unanswered questions and concerns regarding income levels and what the future might hold.

At 16.00 I had the first of two briefings with hotels regarding the current situation, along with the funding that Government is offering.

Those meetings finished at around 18.00.

I left the car at home on Thursday morning I headed out just after 6am for a slightly longer walk along Scollag Rd and then onto Hillberry Rd and down into Onchan Village before turning right along Governor’s Rd and the Grandstand and then finally turn onto Ballanard Rd and heading home in Abbeylands, Onchan. According to my GPS watch, I managed to walk 5.4 miles in 1 hour and 14 minutes

I was still home and working from 8am, in order to catch up with several outstanding emails, but with the Isle of Man enjoying some fantastic weather this week I was able to get into the garden for a few hours to build some new seating for our decking between calls.

The number of messages and calls I am receiving is reducing slightly, but that might change again towards to the end of the month.

At 11am there was a DfE members briefing around a department paper, which will be going to the Council of Ministers shortly.

At 14.00 there was a Tynwald members briefing via “Teams” by the Department of Health and Social Care, and over the next couple of hours Kathryn Magson, CEO and the Minister, David Ashford, MHK gave a very detailed update on the Covid-19 situation, which was very much appreciated by the Tynwald members.

The last hour was spent returning a number of calls and correspondence.

On Thursday evening it was confirmed that the Chief Minister, Howard Quayle, MHK had tested positive for Covid-19, and again I wish him well in his recovery.

In the UK the Prime Minister Boris Johnson was recovering well from Covid-19 and was now out of intensive care, which is fantastic news.

Friday was the start of the Easter Bank Holidays, which is going to be very different this year as people are told to stay at home and to observe the social distancing rules.

As for Ellen and me, we managed to head out for a short walk (3.7 miles) to the shop and back, before I started working in the garden just after 8.30am. Back in 2007/08 I built a wall in the garden with blocks that actually come apart and over the last couple of years a particular flower in the garden has got between the stones and broken sections.

What appeared to be a relatively straight forward task turned into a six hour job rebuilding most of the wall, which should survive a few more years now.

Late afternoon I still needed to catch up with correspondence and a couple of phone calls, but a very enjoyable day in the garden.

Just to finish on Covid-19, the number of confirmed cases on the Isle of Man by Friday teatime was 201, but let’s hope that number starts to reduce over the next couple of weeks.

As for the weekend, nothing planned other than some gardening and walking I would have thought, but I am also hoping to work on a few projects.