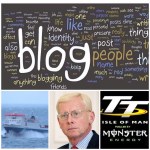 This week was all about the TT Races…….

I certainly got to see the Isle of Man TT up close and personal for the very first time this week. I am so used to just sitting in a hedge like many other people watching the racing, but I really enjoyed speaking to the army of people behind the scenes that ensures the TT Festival is run so smoothly, despite the difficulties at times.

The Manx weather has certainly played its part this year, the race schedule had to be changed several times. Last Saturday’s TT Superbike Race was moved to Sunday, which meant that my own schedule had to also change throughout the week, making it difficult to organise anything else this week.

Part of my role during the race week was accompanying His Excellency, the Lieutenant Governor, Sir Richard Gozney and his guests. I met the Governor at lunchtime on Sunday and along with the Chief Minister and the Home Affairs Minister we made several stops on our way to the Grandstand, including visiting the St. John Ambulance first aid post, the Police Road Safety Team and the Clerk of Course and his staff who are working in the Control Room, including the Emergency Services.

We finally arrived at the start line just in time to speak to the many Scouts working on the scoreboard throughout race week. After the National Anthems we headed to the start line to watch the start of the Superbike Race.

After enjoying the races, I finally got home for teatime, and after catching up with e-mails I called it a day at 19.00.

Monday’s race schedule was also changed several times, but it gave me an opportunity to take Ellen and my older brother Pete, who was on the island until Wednesday, out for breakfast at the newly refurbished Railway Ticket Hall. Once home, it was a quick change into my suit and I headed over to the Grandstand to meet His Excellency for today’s two races, along with a practice session.

Finally managed to get home for 17.30 and having catching up with e-mails again and a number of Constituent matters I called it a day at 20.30.

The weather cancelled the racing on Tuesday as the Isle of Man was being battered with high winds and heavy heavy rain, which wasn’t good news for our TT fans. Despite taking the day off, I still needed to monitor e-mails and to answer various TT related correspondence throughout the day.

I also had to do a couple of media interviews relating to the TT.

Just after 6pm, Ellen and I headed to Government House for a TT reception given by His Excellency, the Lieutenant Governor, which included many representatives from volunteer organisations involved in the TT festival.

Back home just after 20.00 to a number of missed calls relating to the cancellation of the Ben my Chree sailing on Tuesday night. I spent the next hour or so making numerous calls and sending e-mails to obtain updates and to ensure that all stranded passengers found alternative accommodation.

The Tourism Department and the Welcome Centre staff certainly pulled out all the stops on Tuesday night at short notice and managed to find accommodation for around 150 to 200 passengers that were due to leave the island on the Ben My Chee.

When the island faces a crisis we really do get to see everything good about this community.

Early start on Wednesday, I was up at the Grandstand for 9am in order to welcome His Excellency, the Lieutenant Governor, and Lady Gozney for today’s racing schedule at 10.10am. The Mayor of Douglas Debbie Pitts who was supported by the Mayoress, along with Tim Crookall, MLC also joined us today.

I was also asked to make a presentation and to accept a plaque from a gentleman who had travelled from South America just to attend this week’s TT festival. I also managed to do an MTTV interview in between everything else.

The Lieutenant Governor and Lady Gozney only stayed to watch the two main races, which fortunately gave me an opportunity to leave at 15.30 in order to take my brother to the Airport.

Amongst all the celebrations today there was also considerable sadness as three competitors have died in the last 24 hours. Again, I offer my deepest sympathy to the families and friends of Davey Lambert, Jochem van den Hoek and Alan Bonner.

After tea I caught up with e-mails before calling it a day at 19.30.

The race schedule for Thursday finally succumbed to the weather as the Isle of Man was again battered by heavy rain. There was certainly a lot of hanging around in the morning, waiting for the Clerk of the Course to make a formal announcement, which came through at lunchtime.

I spent the first half of Thursday morning doing a Three FM Interview along with sending a number of e-mails. Mid morning Ellen and I headed to Ramsey for lunch and to look around.

On the way back into Douglas we needed to stop off at the Grandstand and then head up to Manx Radio for a couple of interviews.

Only managed to take off one shoe at home before I received a phone call asking me to attend a campsite in Douglas, which I was happy to do. Once home I sent a quick e-mail to raise their concerns, which hopefully will improve things before TT 2018.

Although Friday was a bank holiday on the Isle of Man, I still had plenty of work to complete throughout the day. We left home for 8.30am in order get to the Grandstand for today’s race programme, but unfortunately there were several delays once again.

After dealing with a number of e-mails and informal meetings during the morning, the first formal task was for Ellen and I to meet His Excellency, Sir Richard Gozney and Lady Gozney. After speaking to various Scouts Groups and standing for the National Anthems we headed up to the start line for today’s racing.

The rest of the day was spent accompanying His Excellency, who clearly enjoys his motorbike racing.

I was also honoured to receive the “2017 PokerStars Spirit of the TT Award” on behalf of Barbara Keene, Margaret Cain and Sandra Diamond, the three main organisers of a TT facebook helpline page. The page was set up to help visitors to the Isle of Man with travel and accommodation emergency issues.

The weekend will be taken up preparing for the Keys sitting on Tuesday.