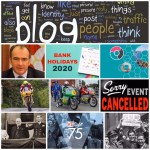 At 15.00 on 8th May 1945, the Prime Minister Winston Churchill formally announced that the war in Europe was over after Germany surrendered the day before.

During his radio announcement, Winston Churchill said that at 2.41am on 7th May 1945 at the Headquarters, General Jodi, the representative of the German High Command, and Grand Admiral Doenitz, the designated head of the German State signed the act of unconditional surrender of all German land, sea, and air forces in Europe to the Allied Expeditionary Force.

He went on to say that “we may allow ourselves a brief period of rejoicing, but let us not forget for a moment the toil and efforts that lie ahead”.

Those words are still very relevant here today as the world continues to battle with Covid-19, but also having to understand the efforts and challenges we must face in the coming weeks and months, in order to recover the economic position we held just a few months ago.

More on the 75th anniversary of VE Day or Victory in Europe Day in a moment.

As for the rest of my week, Ellen and I were able to spend time in the garden on Saturday, and then on Sunday we took full advantage of the excellent weather to head out for a walk around Abbeylands, Baldwin, Union Mills and Tromode. The guide book said 7 miles, but the actual distance was 11.4 miles of beautiful Manx Countryside, which took a few hours to complete.

It was straight into the office on Monday morning before 8am, in order to start getting back into some form of normality, but only for an hour or so. A quick call into M&S before getting home and starting to look at the Home Affairs agenda pack.

At 10am the Isle of Man Government and Manx Motor Cycle Club announced that the 2020 Classic TT and the Manx Grand Prix events had been cancelled, which all but draws the final curtain for this year for the island’s tourism sector.

These key events were scheduled to take place between 22nd August and 4th September, but we now have to look towards the 2021 events when hopefully the Manx borders will be fully open and the Covid-19 pandemic just a distant memory, along with the promenade works.

I then had a 90-minute period in which I recieved one call after another – I think I responded to around 17 different calls during that period.

At 11.45 Ellen and I FaceTimed our niece (Kara) who turned eight this week. A quick verse of happy birthday, a tour of our garden and a catch up before I needed to dial into the latest Tynwald Members’ briefing at 12 noon.

This week it was led by Home Affairs, which included an update from the Department Minister, the Chief Constable and from the Prison Governor, which lasted around an hour.

At 14.00 there was a Home Affairs Department meeting, which again was relatively light. The meeting lasted just under an hour.

The rest of the afternoon was spent reading though the Government’s medium-term response to Covid-19, which was debated in Tynwald on Tuesday, and dealing with a number of Constituent issues.

Tuesday started with a quick 4 mile walk along the Douglas promenade and quay, before calling into the office briefly. Back home and working from 8.30am, in order to start preparing for the Tynwald sitting and for a Treasury and DfE workshop, which took a couple of hours.

I also needed to go through a TT related paper, which required a long response to be drafted. I also needed to return several calls and emails before the Treasury, DfE and local businesses workshop, which started at 11.30am.

There were a number of these workshops taking place this week, but this particular session was chaired by Bill Shimmins, MHK and myself as we reached out to businesses across all sections of the Manx economy. These sessions were designed to obtain the views and insight of the businesses, in order to help restart the Manx economy, and in the world that we are now facing as a result of Covid-19.

A short break to catch up with emails and phone calls before logging into the virtual Tynwald sitting that got underway at 14.30. The sitting started with a Covid-19 statement by the Chief Minister, Howard Quayle, MHK, which generated a large number of questions by Tynwald Members.

This was followed by the Government’s medium-term response to Covid-19.

It is definitely worth reading, because it does give a timeline and background information on the events that have unfolded over the last few months, along with outlining “stage two” of the Covid-19 strategy that is entitled “Stay Safe”. This section outlines the revised policy principles that include 1) Protection of life, 2) Maintain critical national infrastructure, 3) Maintain public safety, confidence & welfare, 4) Support a controlled return to normality, balancing social, economic & health impacts.

That particular debate lasted a couple of hours and there were a couple of excellent contributions by Tynwald Members once again.

In addition to the usual Motions being passed there were a few new appointments to the Public Accounts Committee (PAC) and the Social Affairs Policy Review Committee.

The virtual sitting finished at around 18.45.

As for Wednesday I was working at the kitchen table from around 8am and I was able to work on a couple of projects, but as the morning unfolded I started to receive a high number of calls from concerned Constituents struggling to find child care as more and more employers are asking people to start returning back to the office environment.

Over the last six weeks there have been various spikes in the amount of phone calls I’ve received, normally as a result of a particular press release, and Wednesday was one of those occasions. There is a lot of concern around getting schools back open at the moment and as more people return to work, then our schools need to be ready.

At 14.00 there was a further DfE and Treasury economic policy workshop, but this time with our Tynwald colleagues. Bill Shimmins and I chaired one particular meeting, but there was a parallel meeting also going on, which was being chaired by Lawrie Hooper, MHK and Ralph Peake, MHK.

The workshop lasted over 90 mins as Tynwald Members gave their thoughts on how the island can jump start the island economy.

After catching up with a few things I was able to finish for around 16.30.

The usual routine on Thursday, which involved a quick 4 mile walk along the Douglas promenade and quay before calling into the office briefly and then into M&S for some shopping.

Once home I needed to go through a couple of urgent tourism papers relating to the accommodation sector. At 10am I had a quick catch up with the Head of Tourism, but I also needed to return several calls from Constituents and these related to DfE applications and getting children back to school.

At 11am I dialled into a tourism team meeting involving DfE officers, the Chairman of the Visit Agency and the Head of Tourism. Not an easy meeting as we discussed some of the challenges facing the industry at the moment, along with the current situation in which almost all tourism accommodation is currently closed, and then how we can re-create that right environment for the industry to flourish in the near future.

The meeting lasted just over an hour and every time we have one of these discussions, it does really highlight the difficulties and challenges we face.

Just time to grab some lunch and to go through further papers relating to the Lord Street Development, campsites and offshore workers, before logging into the latest DHSC briefing to Tynwald Members, which gave the latest updates and information.

Once I caught up with the final few papers, emails and phone calls I thought I had finished for around 17.30, but little did I know that the Chief Minister, Howard, MHK had just announced that the Senior Race Day Bank Holiday was being cancelled.

As a Member of House of Keys I can assure Onchan constituents that I certainly wasn’t aware of that announcement in advance, and that I was only informed of the decision formally at 19.30 by the Treasury Minister, Alf Cannan, MHK which is extremely disappointing.

Not entirely sure what happened around that particular announcement at the press briefing, but it certainly generated a considerable amount of correspondence and messaging throughout the evening, and it wasn’t until Friday that the Government put more information into the public domain – more on that in a moment.

Friday was a bank holiday and it should have been a day of celebrating the 75th anniversary of VE Day or Victory in Europe Day with various events being held to mark the occasion.

Unfortunately many of those events have been cancelled because of the ongoing concerns around the Covid-19 pandemic. That said, I am sure that most people still stopped for moment of reflection at 11am and at 15.00 to mark the significance of the occasion.

Instead, Ellen and I were able to start the day with a walk on the promenade in the morning, and although it was a bank holiday I still needed to catch up with things in the morning, but I was in and out of the garden for most of the day, which was very enjoyable.

Just after 11am I tuned in to listen to the latest Public Accounts Committee (PAC) evidence session, which was with the DfE Minister, Laurence Skelly, MHK and Department officers, but I didn’t take part in this particular evidence session as a PAC member, given the fact that I am in DfE.

This was followed by a PAC meeting, but it was only a short meeting as I will be excluded also from next week’s evidence session, which will be with the Treasury Minister, Alf Cannan, MHK.

The Treasury Minister also announced on Friday morning that a one-off bank holiday will held on Friday, 28th August 2020, in order to fully recognise the island’s community effort during Covid-19, which is certainly a better message than simply cancelling a bank holiday.

From around 14.00 I was able to spend some time working in the garden enjoying the fantastic weather that the island continues to experience.

We end the week with the latest figures on Covid-19 cases on the island, which have only increased from 316 to 329, which is very positive news.

The total number of deaths remains 17 in the community and 6 in hospital.

As for the weekend, I have my political surgery on Saturday morning between 9.30am and 11am and we are hoping to head out for a walk on Sunday.