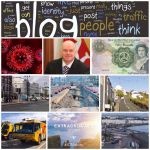 After what felt like an eternity for many businesses located on Douglas Promenade, the Department of Infrastructure have announced that two way traffic will be re-introduced on the promenade from Tuesday 8th September.

It was originally proposed that the promenade wouldn’t go two ways until December, so the announcement this week will be welcome news to so many people and businesses located in that area, especially as we look towards schools re-opening again and for the run up to the Christmas holidays etc.

Summerhill junction which is one of the main roads in and out of Onchan will also re-open from Tuesday next week, along with the removal of the temporary bus/bike lane at St Ninian’s and at Glencrutchery Road, Governor’s Dip, which will again be welcome news for those people driving into and out of Douglas from the North of the island.

Unfortunately, on the downside Broadway junction will now remain closed until the end of October. I know I kept mentioning that Broadway would be opened by 8th September in recent weeks, but when presented with the options in the Department last week, the decisions taken I felt were the right ones, in order to get traffic back to some form of normality.

The Department of Infrastructure also announced this week that 160 spaces in Chester Street car park will become a “disk zone”, in order to improve access to the Douglas town centre, which should also support the local economy.

Levels 2 and 3 at Chester Street will be “disk zone” and are now available to use – so support local.

As for my own activities this week, it was a relatively short week in many ways. We had the “Supermanx Bank Holiday”, which also incorporated Monday’s August Bank Holiday.

As I mentioned in a separate post on social media, Ellen and I spent most of the weekend, along with the bank holiday Monday in the garden as we continue to try and transform the lower section of our garden.

We have lived in our little cottage for around 13 years and the garden originally sloped down towards the river before I decided to level part of the ground, in order to built some garden walls around 10 years ago, which now splits the garden into two sections.

We actually started landscaping the lower part of our garden many years ago, but unfortunately it never truly worked, mainly due to the poor quality of the materials we used. We tried to save money on the items we bought, including a greenhouse that was a few quid cheaper than other better quality ones, but it always leaked and wasn’t good enough to use unfortunately, and I think Ellen was mightily relieved when we finally pulled it down a few months ago.

Once our Baltic cruise was cancelled due to Covid-19 we decided to spend the money in the garden, but it is hard work clearing the area and then starting to build the wooden frame for block paving and the new greenhouse etc.

I think we spent around 21 hours in the garden over the long bank holiday, and it will certainly take a few months to get everything done.

Anyway, I was back in the office just before 8am on Tuesday for a busy day ahead. Just before 9am I headed down to the Sea Terminal for a meeting and a tour of the building, which was very interesting.

I was joined by the Chairman of the VIsit Agency and the Head of Tourism as we looked at various options for making the Sea Terminal more welcoming for visitors and locals etc. A big thank you to Mark Kenyon, Director of Ports for showing us around.

From there it was straight down to Ronaldsway Airport for a meeting with the Director and Deputy Director of the Airport, which also included a tour.

Many thanks to Ann and Jez for showing us around.

I managed to get back to the office just before 14.00, which only gave me a few minutes in the office before walking down to the Sea Terminal for a DOI policy and strategy meeting that looked at “speed limits” on the island and our “coastal footpaths” – two excellent presentations and briefings.

I managed to get back to the office for 17.30, but once home I still needed to catch up on emails and one particular call with a Constituent relating to a land dispute, which is going to be complicated, as I know from my own personal experience.

I also needed to start going through the DEFA agenda before finishing at around 20.30.

Up early and working from around 7am on Wednesday morning, in order to get through the rest of the DEFA agenda pack. The actual DEFA meeting was delayed to until 10am so I was able to catch up with a few colleagues in the office and the DfE Minister.

The first DEFA meeting related to Policy and Strategy, which was followed by the usual Department Meeting and I think we were finished for around 14.00, which was a little earlier than scheduled. The rest of the afternoon was spent in the office trying to catch up with things.

I also had a couple of difficult Constituent issues to deal with. As I have mentioned previously, as MHK’s we cannot deliver everything in this role, and on occasion we do fall short, but that doesn’t mean that I haven’t genuinely tried to get the information, help or advice that the Constituent is requesting on every single occasion. However, there are times when my hands are tied and I have nowhere to turn, especially when I am relying on someone else to do their part.

I think this has only happened a handful of times out of 400 or 500 Constituency enquiries over the past four years.

I finally left the office for around 17.00, but I still had a few things to catch up with before finishing for around 19.00.

Most of the morning was taken up with several long phone calls, and one of those calls was with the Land Registrar, in order to obtain some general advice and help. I certainly have more confidence in the current Land Registrar compared to the previous on, who i believe seriously let us down during our own land dispute.

From time to time there is still the odd comment that says that we tried to steal a parcel of land, which was never the case. We simply bought our cottage in 2007, and anyone who visited our property could easily see why we thought the land in dispute was ours, especially when we used the land for seven years until the mistake was identified.

Unfortunately, the Land Registrar at the time simply transferred the case to the Land Commissioner without fulfilling his duties and responsibilities, in my opinion, which was unforgivable – anyway, let’s move on before I get myself in trouble.

Towards lunchtime I headed into Onchan to have a meeting with the Constituent who is going through a difficult land dispute.

In these sort of situations you have to remain neutral, while also trying to give the best general advice you can, but without giving legal advice – which isn’t easy…..

The meeting lasted almost two hours as we ploughed through various deeds, maps and documentation.

Back to the office and straight over to DfE for a Visit Agency meeting for which I was ten minutes late arriving. The Agency is currently looking at one particular idea, in order to help the industry in the weeks and months to follow, but it would require support from both the Department and Council of Ministers, then the general public…… further details in due course.

Back to the office just after 15.00 and the last couple of hours were spent in the office catching up with things before heading home at 17.15.

At 16.00 on Thursday the Chief Minister, Howard Quayle, MHK had called a “one off” press conference in which the Manx Government confirmed that the island’s policy on self-isolation when returning to the island could be reduced from 14 days to 7 days, subject to a Covid-19 test after the seventh day, which will cost £50.

The latest information can be found here:

As for Friday, we were meant to be flying to the UK before the start of our Baltic cruise on Saturday lunchtime, but that was cancelled due to Covid-19. Instead we headed out for breakfast and then into B & Q before spending most of the day in the garden continuing to work on the latest project.

I have cancelled most of my holidays, but I kept Friday and Monday next week to get a few things done. I still needed to take a number of calls and I started to catch up with correspondence from around 15.30 until around 18.00.

As for the weekend, hopefully we can continue working in the garden and on a couple of work projects, because once October arrives I will have very little time at the weekends.