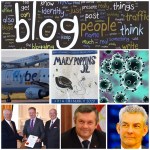 The collapse of the regional airline Flybe early on Thursday morning will seriously affect the Isle of Man, not just for local residents travelling to and from the UK, but also for the island’s tourism industry, which was just starting to show serious signs of increased confidence on the back of some major investment in new hotels, the revamp of Douglas promenade and at the airport and the sea terminal.

The final nail in the coffin for the troubled airline was blamed firmly on the Coronavirus after the regional airline struggled to raise funds, especially as bookings dropped off in recent weeks because the virus is now hitting the UK hard.

More on the troubled airline shortly.

I have also tried to avoid discussing the Coronavirus (Covid-19) over the last couple of months in order to continue with a level of confidence and business as normal approach, but questions relating to the Isle of Man TT Festival and other key Tourism events are now being raised, both by constituents and local media.

The Manx Government has a dedicated website, which gives the latest update for residents, businesses and visitors to the Isle of Man etc.

What we do know is that the virus started in Wuhan in China at the beginning of the year and since then it has spread across the World with more than 100,000 people known to have been affected so far and more than around 3,000 people have died

The number of Coronavirus cases in the UK has now reached over 90 and that figure continues to climb.

The headlines are alarming but at the moment the risks remain moderate and the individual risk remains low on our island, but we do need to put this particular virus into some form of context.

Just google the top 10 deadliest viruses and you will see how serious this disease is compared to some of the really big viruses across the world.

I think the most important message is for people to protect themselves by keeping their hands clean and making sure that you frequently wash your hands with hot water and soap or a hand sanitising gel.

If you are showing symptoms of a cough, a high temperature or shortness of breath or signs of a common cold or flu, then you might consider being tested, but don’t just turn up at the doctor’s. Consider going into self-quarantine, which will involve staying at home and avoiding going into work, school and other public areas. Get friends to deliver food, medicines etc.

Anyway, let’s move on – last Saturday I attended the funeral of my Tynwald colleague and Home Affairs Minister, Bill Malarkey, MHK who had lost his battle with cancer recently.

The service was held in St George’s Church and led by the Archdeacon of Man, Andrew Brown, and it was a beautiful service, a very Manx funeral, which focused more on Bill being a family man than being a Member of the House of Keys or previous Douglas Council Member.

Just sitting in the Church reading through the Order of Service I realised that it almost mirrored my own choice of arrangements, with Ellan Vannin by the Bee Gees, the Manx flag on the Coffin and the Manx National Anthem etc.

It was a wonderful service and a sad loss and my thoughts are with Pamela and Bill’s three daughters at this difficult time.

On Saturday evening I joined Ellen and a group of musicians who were on island for a recorder playing tutorial course over the weekend. We had dinner at the Boatyard in Peel and it was great to catch up with some very old friends that I hadn’t seen for around five years.

No meetings or briefings on Monday but I still went into the office for a full day behind the desk working on a couple of projects which required a considerable amount of research and reading through various reports.

I thought I had dealt with the Area Plan for the East a few months ago, but the amendments published by the Cabinet Office recently are certainly testing me, especially around the future population and housing needs of our island.

Late on Monday the Chief Minister informed Tynwald Members that Dr. Alex Allinson, MHK had been appointed the new Minister for Education, Sport and Culture and that Graham Cregeen, MHK had accepted the role of the Home Affairs Minister.

Fair to say that Manx Politics is brutal at times, but I certainly wish both Ministers all the very best for their new roles.

Once home I still needed to go through the House of Keys Order Paper before finishing at around 21.30.

Back into the office before 8am on Tuesday for this week’s House of Keys sitting that started at 10am with just 9 oral questions and 5 written questions.

We then had the second reading of the Registration of Electors Bill 2020.

The sitting finished just after 12 noon.

The sustainable vehicle duty model presentation certainly generated a considerable amount of questions and comments from Tynwald Members, and again I have to seriously question why some of those concerns were not being raised in the Department by the Minister and the political Members.

Finally got back to the office for 15.00 and the rest of the day was spent in the office.

Wednesday started in the usual fashion before Tim Crookall, MLC and I walked over to DfE at 9am for a meeting relating to one of the promenade support schemes.

Back to the office and then straight into Onchan for a couple of Constituent meetings, but one of those meetings had to be re-scheduled for next week.

I also spent any spare time throughout the day working on a couple of projects, one of those being the Area Plan for East that required a considerable amount of research. I think so far I have spent around 17 hours researching the various points being amended by the Cabinet Office.

At 13.00 there was a presentation by the DfE Digital Agency, which gave Tynwald Members an update on the work currently being undertaken by the board and officers.

The rest of the afternoon was spent in the office, but I did spend an hour or so chatting with the Policy and Reform Minister Chris Thomas, MHK. Although the conversation started with the Area Plan for the East, it soon widened out and it was great to catch up with Chris.

I also managed to secure a couple of results on behalf of Constituents: one related to a lady that has desperately been trying to get answers for many many years, hopefully she will get some answers from a meeting scheduled later this month, in order to bring an element of closure.

I left the office at 17.00 in order to get home and changed before Ellen and I drove South to the King William’s College to watch their production of Mary Poppins Jr, which was fantastic.

A massive thank you to everyone involved in the production and to King William’s College (KWC) for the very kind invitation.

It also gives me the perfect opportunity to explain why I tabled a question in the House of Keys last week on bus fares for KWC students. The question didn’t come from a Constituent, but from a DfE visit to the College a few weeks ago when the topic was mentioned, along with the invitation to attend the KWC production of Mary Poppins.

I asked the question because I genuinely felt the current system is unfair, not just to KWC students but also to IOM College students, a point that Lawrie Hooper, MHK raised.

Any student being educated on the Isle of Man should be treated equally in my opinion, and I still do not understand why some Manx students are being asked to pay more on Isle of Man buses – this isn’t about class or education but an unfair system that needs to be changed.

Rumours surrounding the collapse of the regional airline Flybe started to leak out on Wednesday evening, so as I was wide awake from around 3am on Thursday morning, I was able to get the latest news on the regional airline that had gone into administration, which is very sad news.

My thoughts instantly moved towards the island tourism sector and those local residents stranded in the UK trying to get home over the next few days.

Flybe and the Coronavirus will certainly test this administration in the coming weeks and months.

I still went into the office for 8am on Thursday morning, and it was another day in the office working on the same couple of projects, which are taking up considerable time this week.

My good friend Tim Crookall, MLC called me early on to say that he was withdrawing from the Legislative Council elections, in order to consider standing in the House of Keys General Election in 2021.

Although there are no guarantees, I think most Tynwald members felt that Tim had sufficient votes to get re-elected, so it must have been a very difficult decision to have reached, especially when he is now possibly looking towards the 2021 House of Keys General Election in Peel.

A week in politics is a long time, so the saying goes, but I wouldn’t have thought for moment that by the end of this week, a political career would be flourishing, one would have stalled and a couple would have drawn to a close……

Tim has been an excellent friend within the corridors of Tynwald, I think our colleagues would say that we were as thick as thieves at times, and I will certainly miss his political support and input over the remaining 18 months of this administration.

I certainly wish him all the very best for the future.

At 10am a Constituent called into the office, in order to obtain some advice on an educational course that the department is not supporting at the moment.

The next hour or so was spent in the office before Ellen and I headed out for noodles in our favourite place for lunch.

Back to the office to go through a couple of department papers before going up to the Barrool Suite at 14.30 for the first of two hustings for Legislative Council Candidates.

The hustings involved an opening speech and a series of questions from MHK’s and both hustings have been filmed by MTTV, so they should appear online in due course.

On Thursday evening I needed to catch up with emails along with answerIng a large number of calls in relation to Flybe and the island’s patient transfer service, which is seriously being affected by the collapse of Flybe at the moment.

I think the last call was well after 22.00, and I also needed to read though a contract of a Constituent who asked for an impartial second opinion.

Normal start on Friday, but I had a choice to make early on – either attend the Quing Conference being held at the Villa Marina or stay in the office to finish off one particular project.

With the Tynwald offices very quiet, I took the opportunity to finish off my research into the Area Plan for the East, which I managed to finish just before 14.00.

Shortly after that, we had the second hustings with the final five Legislative Council Candidates, which included opening speeches and a series of questions.

By Friday evening I had decided on three candidates that I will be supporting and possibly a fourth candidate, but it hasn’t been an easy process.

As for the weekend, nothing really scheduled but I do want to call in to the Manx Museum to see the Art Exhibition, ‘Handmade Superheroes’ by the Isle of Man Children in Care Council.

I also still need to catch up with various correspondence, along with preparing for a busy week scheduled for next week.