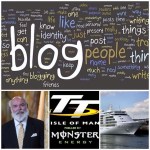 The next couple of weeks are certainly going to be slightly different, because there are no House of Keys or Tynwald sittings to prepare for, but Departmental and Constituent work doesn’t stop during the TT fortnight.

Even though my workload has decreased, I will still have to make myself available throughout the TT fortnight.

I spent a little bit of time last weekend meeting with Robert Craine, Chairman of the IOM Marshals Association, in order to review and witness the conditions for signing on for this year’s TT Festival.

Without the Marshals and army of volunteers that work tirelessly behind the scenes there wouldn’t be a TT festival, not to forget the level of input and involvement by other Government Departments, which are also pushed to their limits over this two week period.

We will certainly need a debrief with the IOM Marshals Association when the TT festival is over, in order to improve conditions wherever possible.

Despite Monday being a bank holiday I still had a couple of formal tasks to complete. At 10am I headed down to the Sea Terminal in order to jump on board a tender that took me to the “Silver Whisper” Cruise Ship, which was visiting the Isle of Man.

The tender journey each way was around 10 to 15 minutes and it was very rough, especially waiting to disembark the ship – I certainly needed my sea legs……..

Finally got back on firm ground at 12.40 and after grabbing some lunch I continued to work through the Lord Lisvane Report (review of the functioning of Tynwald), in order to prepare for June’s sitting of Tynwald. I finally finished around 16.00.

On Tuesday morning I didn’t go straight into the office but took the opportunity to stay at home to catch with e-mails, along with drafting some additional questions for the Keys Sitting on 13th June.

I was in the office for around 10.30 and the first task was send out numerous letters with regard to the British Road Racing Championship, in order to ensure that some residents are aware of road closures at the end of June.

At 12 noon I headed up to the Barrool Suite for a presentation and Q & A session given by Lord Lisvane, who was on island today. The presentation finished just before 14.00 and after catching up with e-mails I headed home for the afternoon.

I spent the rest of the afternoon going through Public Accounts Committee agenda papers for Wednesday’s meeting, along with responding to several TT related matters. I also started to review a medical file on behalf of a Constituent, which I need to review and respond to before the end of June.

In the office for 9am on Wednesday morning, which gave me time to catch up with e-mails and phone calls before attending the Public Accounts Committee meeting, which started at 10am.

I am certainly enjoying the work of this Committee, they have an incredible depth of knowledge and experience that will certainly raise a few eyebrows in the coming months.

The meeting finished at 11.45 and after completing several other tasks I headed home for 12.30. I then spent a couple of hours in the garden before getting changed and heading to the Cat with No Tail, which was being re-opened after a five-week refurbishment programme.

I met up with the DED Minister Laurence Skelly, MHK at 15.45 and it was the Minister who was given the honour of pulling the first pint. We also stayed for tea, which I can recommend – I had half a chicken with fries……. very nice!

I had scheduled to take Thursday and Friday off because my older brother Pete was travelling back to the Isle of Man to watch some of the TT races.

Although I had no meeting scheduled for these days, I still need to answer various e-mails, messages etc, along with drafting several correspondences but it still felt like a day off on Thursday.

Friday was most definitely a day off, which was spent doing touristy things – breakfast in Capone’s to start the day, then the usual shopping and buying of TT merchandise. We then headed to the Manx Museum to look at the new Mick Grant display, before heading up to the Grandstand for a look around. Back to the house for mid afternoon, and I spent a couple of hours catching up with things before going back to the grandstand to watch tonight’s practice session.

My schedule for the weekend has now also changed, Saturday will be a free day to enable me to watch some of the practising, but I will be working on Sunday as I will be meeting His Excellency, Sir Richard Gozney at the Grandstand.