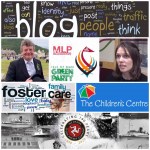 This week the Manx Labour Party undertook a major transformation as political stalwart David Cretney stepped down as the Party Leader after being involved in Manx politics for over 40 years, and I wish him well in his retirement.

Joney Faragher has taken over the reins as Party Leader and she will be supported by Sarah Maltby as the new Party Chairman. I wish them and the party all the very best for the future, especially as we head towards a House of Keys General Election next year.

David Cretney stepped down as an MLC back in February and I remember during a Manx Radio interview him saying that the Manx Labour Party would return to Tynwald. Personally, I would argue that a number of Tynwald Members already follow the principles and values of various political parties such as Liberal Vannin, the Isle of Man Green Party, Mec Vannin and the Manx Labour Party without the restrictions of a collective view or party politics etc, but each party is structured slightly differently.

I guess the question is: will any political party on the Isle of Man ever secure an overall majority in the House of Keys?

Back in 2016 one of the first big decisions I had to make when deciding to stand for the House of Keys was “Independent’ or “Party”…..

My own political spectrum can be just left of centre or just right centre depending on the policy and direction, so I could have so easily joined Liberal Vannin or the Manx Labour Party.

I still can remember the meeting I had with the LibVan Party when I said that I would prefer to fail in my election campaign as an independent candidate than to be elected within a party structure only to let the party down once elected.

I also attended a couple of meetings of the Manx Labour Party, but in the end I went for being an independent candidate simply because I wanted the flexibility and freedom it gave me as an MHK.

Looking back I still feel I made the right the decision, but over the last four years I have had a close working relationship with both Lawrie Hooper (LibVan) and David Cretney (Manx Labour) and many other Tynwald colleagues.

It will be interesting to see if any political party can actually break through in 2021, but more importantly if they can retain all members elected for the full term of the administration.

In other news this week the Isle of Man Steam Packet Company celebrated its 190th anniversary and It remains the oldest continuous operating passenger shipping company in the world, which is some achievement.

According to their website, the Steam Packet has had many highs and lows over the last 190 years, including a number of strikes in the 1980s. It is hard to imagine that just a few years ago the company was in the ownership of various hedge funds and investment houses who had very little interest in the Isle of Man other than the profits being generated.

The company was originally called the “Mona’s Isle Steamship Co” and the inaugural crossing took the Mona’s Isle vessel from Douglas to Liverpool on 17th August 1830 under the command of Captain William Gill.

Here in 2020 the ownership of the Isle of Man Steam Packet Company is now under the Manx Government and the future is certainly looking brighter with a new ferry terminal already underway in Liverpool and new ships being purchased.

I won’t dwell too long on the alternative option, which could have seen the Isle of Man Steam Packet Company run for “cash” that might have significantly increased freight and passenger costs between 2020 and 2026, along with a potential legal dispute over one of the piers in Douglas.

As for last weekend not much to report as the weather on the island was horrible and it felt like it had rained for forty days and forty nights, but I spent a lot of time catching up with reading etc.

Not many meetings scheduled on Monday so I was able to get my head down to work through a full in-box and to fully prepare for a busy week ahead. My role as the Children’s Champion is still a steep learning curve and I am currently working my way through a large file of various reports and documents etc, but I am also receiving a vast amount of correspondence, which is also bringing a number of issues to my attention.

Just after 9am I attended a local school, in order to support a Constituent who had a meeting scheduled with the headteacher. In these particular circumstances my role as MHK is to simply support the constituent, and if the meeting goes well then your own contribution as the MHK should be very little, other than listening and offering a level of support.
Just for clarity I attended the meeting as a Constituency MHK and not as the Children’s Champion.

Two further Constituent meetings on Monday morning before I was able to focus on the House of Keys sitting on Tuesday, along with a few other issues etc. I also spent a couple hours drafting a raft of questions for this month’s Tynwald sitting, along with going through the large agenda packs for two DEFA meetings scheduled for Wednesday, which required various notes to be drafted.

In the office just before 8am on Tuesday to prepare for the final House of Keys sitting for this Parliamentary term. Before the sitting I needed to catch up with a number of small tasks, along with reading a considerable amount of correspondence received from Head Teachers, Parents and Constituents relating to the Education Bill 2020.

The sitting got underway at 10am with 29 oral questions and 24 written questions, but we only managed to reach question 12 in the allotted time. Unfortunately, the vote to continue with questions time was 11 for and 11 against, so the motion failed to secure 16 votes. We then had the first reading of the International Maritime Standards Bill 2020 and the Medicines (Amendment) Bill 2020.

The Education Minister, Alex Alllinson, MHK then took the Education Bill 2020 through its Second Reading after Bill Shimmins, MHK tried to bring an adjournment until October, in order to receive and the review the independent report into the Education Department first.

A motion to set up a House of Keys Select Committee to go through the Education Bill was approved, but the vote couldn’t have been closer with 11 votes for and 11 votes against. In the end the Speaker, Juan Watterson, SHK used his casting vote in favour of setting up a Committee.

The Committee includes Jason Moorhouse, MHK, Bill Shimmins, MHK, Chris Thomas, MHK, Ann Corlett, MHK and Lawrie Hooper, MHK. It will be a very interesting Committee and I am looking forward to their findings in October.

Just after 13.00 the House of Keys sitting adjourned until 15.00, in order for Members to attend the Speaker’s lunch, which is an annual tradition. This year’s lunch was held at The Tickethall once again and it is always a great opportunity to catch up with colleagues in a less formal setting.

No time for coffee as we needed to get back to the Keys for 15.00, in order to get through the second reading of the Manx Care Bill. The rest of the sitting only took around 40 mins to complete and from there it was straight into a conference call in respect of a tourism event that we are looking to pencil in for 2022.

I left the office just after 17.00, but I still had a lot of correspondence to get through, along with two DfE economic papers that needed careful thought and a response to be drafted. I also had to return a number of calls that were complex and long before I was able to call it a day at around 21.30.

I started work at home from around 6.30am on Wednesday, in order to go through any remaining points or papers relating to the DEFA agenda before getting into the office for around 8am. This was followed by two short meetings with the Director of Motorsport and the DfE Deputy CEO, along with returning several calls before I was able drive down to St John’s for 9.30am for the first of two meetings.

The first meeting related to DEFA Policy and Strategy, which finished at lunchtime and this was followed by the Department meeting which started at around 13.00 and lasted around 90 minutes.

The last couple of hours were spent in the office, but once home I still needed to catch up with a few things before I was able to finish for around 20.30 – there just aren’t enough hours this week.

In the office early on Thursday morning before spending most of the day on the road. Just after 9.30am I drove west to meet up with a group of Foster Carers, which was a very interesting meeting specially when I had already read through the paper prepared by Tim Baker, MHK as the previous Children’s Champion.

Some initial work has already started from the autumn, but so much more work is needed over the next twelve months if we are to improve this vital service.

From there I went into Onchan for a quick Constituent meeting before visiting a local charity that is looking at a particular project involving children. I fully support the project, but with several announcements to be made by the charity over the next couple of months, I won’t give further details on the charity or the project until they have issued further details themselves, but I wish them well.

Back into Onchan for another meeting before driving onto the Old Castletown Road to meet up with the Head of the Children’s Centre who gave me a tour of Walberry Farm.

The Children’s Centre have done a fantastic job at the farm, it is a great environment for learning and I also wish them all the very best of luck.

I managed to get home for just after 16.00, but I still had a lot of correspondence to catch up with before finishing for 18.30.

Some valuable lessons learnt on Thursday, especially around one particular correspondence I received and making sure that there is a clear separation of my functions as the Children’s Champion and my role as an MHK representing Onchan.

In the office before 7,30am on Friday and my first meeting was with a probation officer who wanted to highlight a number of concerns with me as the Children’s Champion. A very powerful meeting and a lot of concerns raised that will require further investigation and correspondence to be drafted over the weekend.

The DfE extraordinary department meeting was cancelled, but the political meeting still got together for an hour to have a general catch up. With the meeting cancelled it did generate some extra time in the office.

After lunchtime I had three small meetings before I was able to finish just after 16.00.

In respect of Covid-19, the Isle of Man is still very fortunate to have no active cases and the total number of confirmed cases remains 336. Unfortunately, the UK that has just announced a full lockdown of Leicester, which is worrying times and will delay the Isle of Man opening up its borders to the UK.

As for the weekend, I still have a lot of work to catch up on before we celebrate a very different Tynwald Day this year.