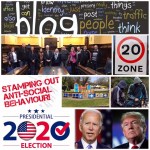 Not sure if anyone else is starting to follow the build up to the 2020 US election, which will take place on Tuesday 3rd November, but early postal votes have already begun in some states. I was reading one article this week which is predicting that the number of people voting either in person or by mail could exceed 145 million….

I have been interested in US politics since I learnt about the 16th US President, Abraham Lincoln in school, but also since the 2000 presidential campaign of Al Gore in which he lost to Texas Governor George W Bush after weeks of legal battles over the recounting of votes in Florida.

Looking back I always thought he would have made a great US President and I still believe that the United States would have been a better place today if he had in fact won the election back in 2000, but that is just history now. I mention all of this because I have a feeling that the 2020 US Presidential election against the incumbent President Donald Trump of the Republican Party and former Vice-President Joe Biden of the Democratic Party could also be played out in the courts come November / December.

By way of some facts, the US election is always held on the first Tuesday in November and only a Democrat or a Republican candidate has won the US Presidential election since 1848 when Millard Fillmore and the Whig Party won.

The US election is hard to follow at times, but voters actually choose who they want to be President, and therefore they are not voting for a party, unlike the UK election system. However, to ensure fairness between the States, they have a system called the “Electoral College”, in which each State is given a number of votes that reflects its population in comparison to the National population – for example California is allocated 55 Electoral College votes and another less populated State such as Wyoming is allocated just 3 votes….

All of that said, a US Presidential Candidate can actually still receive more popular votes across the US, but fail to become the US President, as we discovered in 2016 with Hilary Clinton.

Anyway, this week Donald Trump and Joe Biden had their first presidential debate in Cleveland, Ohio, but I think most people are describing it as nothing more than a bitter and divisive spectacle, but still great viewing – the highlights programme is available via the BBC iplayer.

Back to my own schedule this week, last Saturday I held my Political Surgery in Onchan Community Hub and although it doesn’t start until 10am the first Constituents called in just after 9.45am, in order to talk about the anti-social behaviour that has been happening in and around Onchan recently.

A very difficult discussion with the Cubbon family given the recent events that have unfolded in our village and the community, and I also have to choose my words very carefully because of the ongoing investigation etc.

What I can say is that I am in continuous dialogue with Onchan District Commissioners and with the Police, in order to ensure that all Onchan residents can feel safe in their homes and that any anti-social behaviour in our village is kept to an absolute minimum, especially around residential streets and property etc.

Once the surgery finished I had two very quick Constituent meetings before heading into town to take part in the FA Cup of Pool, which was being staged in the Manx Legion and the Douglas Snooker Club.

Now this is where I need to give a full confession – rightly or wrongly I entered the FA Cup of Pool a few weeks ago not really knowing my full schedule at the time, and definitely before we booked a table at Ocean Views in Onchan Park to celebrate our 14th wedding anniversary.

I had already managed to get through the prelim round and the next round that was being played on Saturday afternoon which I also won. I even managed to spend a couple of hours in the afternoon drafting various correspondence relating to the political surgery earlier in the day, along with preparing some further notes for the Tynwald tour I was giving on Sunday morning, before finishing for around 16.30.

As I mentioned, on Saturday evening Ellen and I headed to Ocean Views in Onchan Park to celebrate our 14th wedding anniversary. It was a lovely meal and it was great to see the venue so busy, but unfortunately, my next match in the FA Cup of Pool was scheduled at 21.30 so our celebratory evening was cut a little short.

I can only thank my wife sincerely for her kind understanding in the circumstances, but it was worth it because I managed to win the match 9-6.

On Sunday morning I was in the office for 8.30am, in order to prepare for the Tynwald tour that started at 10am. Around 13 people attended my first group tour of the Manx Parliament, which lasted around two and half hours, and I am extremely grateful to everyone that came along, especially when it gave me an opportunity to show people around our Parliament Chambers and to give an insight into my role as an MHK.

By the time I finished tidying up it was around 13.00, so I headed down to the Manx Legion for my last 16 match, which I lost 9-6. I finally got home for around 16.00, but I still needed to catch up with a few things before finishing for around 18.00.

I was back in the office just after 7.30am on Monday, in order to start catching up with a few things that I should have done over the weekend. Once I caught up with any outstanding correspondence I needed to go through several department papers for decision.

I also needed to go though the DOI agenda pack, which I should have also done over the weekend, along with returning a number of urgent calls. This in turn meant I wasn’t able to attend the Springfield Court coffee morning, so I can only offer my sincere apologies to the residents for being unavailable this month.

Just before 11am I headed to the Sea Terminal for a joint meeting between the DOI and the Isle of Man Visit team to discuss a number of mutual of points of interest and to ensure a closer working relationship on various projects. By the time the meeting finished I didn’t have sufficient time to get back to the Barrool Suite for an Economic Recovery presentation being given by the Treasury Minister, but I have requested copies of the notes and slides etc.

At 13.00 we had the DOI political members’ catch-up meeting ahead of the Department meeting, which focused on Housing and Highways before going through the main agenda.

I finally got back to the office just before 17.00, and on Monday evening I met up with Mr Cubbon after our initial chat on Saturday morning, in order to walk around Onchan Park and to discussion the anti-social behaviour over a cuppa.

In the office for normal time on Tuesday and my first job was to go through some minutes and the agenda for the Department of Health & Social Care (Children & Families Division) Corporate Parenting Group meeting, along with a DfE paper.

At 10am I had a follow up meeting with a Constituent who has a couple of ongoing legal issues that are both complex and extremely difficult, and again it is one of those situations in which it is very difficult for me to give any advice as an MHK, other than offering a very sympathetic ear.

This was followed by a briefing organised by my colleague Kate Lord-Brennan, MLC on “Healthy Streets”, which I think most Tynwald Members fully support, we just need to get it implemented.

Introducing 20mph zones in and around our towns and villages is relatively easy, the big question is how do we police them…..

Back to the office briefly to work the Area Plan for the East before driving to Crookall House to chair my first Department of Health & Social Care (Children & Families Division) Corporate Parenting Group meeting, which got underway at 16.00, but I was back in the office within an hour.

I left the office towards 17.30 once I had caught up with a few things.

It definitely felt like autumn on Wednesday morning with dark skies, heavy rain and strong winds, not forgetting roads and gutters now full of fallen leaves….

For me personally my schedule was very light on Wednesday, which finally gave me the perfect opportunity to focus my attention on the Area Plan for the East Written Statement, which was published this week and will be debated in Tynwald next month.

Since June 2018 I have already spent hundreds of hours going through various Onchan Local Plans, Reports and submissions etc, but I can’t remember the last time I was able to sit at my desk poring through the latest information and documents that were published this week.

However, the day wasn’t entirely spent at my desk, because at 10am I needed to attend a Douglas and Onchan traffic meeting with the DOI and at 11.30am there was a DfE tourism team meeting with someone who is looking to start a new tourism idea, which I personally hope can be put into action as quickly as possible.

I was also able to go out with Ellen for lunch, but the rest of the day was spent at the desk working on this one particular project.

Although I was in the office before 8am on Thursday I did manage to take a couple of hours off during the morning to get some shopping done and to do a couple of chores after a Constituent meeting in Onchan.

At 12 noon I met up with the DOI Chief Executive, Nick Black to discuss the Energy from Waste Plant and a couple of projects that will be happening in 2021. We also took the opportunity to discuss various other topics and issues, which I found very helpful and informative.

Back into Onchan for a further Constituent meeting before getting into the office just after 14.00 to continue working on a few projects. On Thursday evening I attended the public meeting on “Anti-Social Behaviour” at the Community Hub, which had been organised by my colleague Julie Edge, MHK.

Around 50 people attended the meeting, which included representatives from the Isle of Man Constabulary, Onchan Commissioners and local MHK’s. A very constructive meeting and a lot of valid questions and concerns raised by concerned residents.

I just hope that we can as a Community address some of these incidents of anti-social behaviour.

I finally finished on Thursday 22.30 once I had caught up with a few things.

As for Friday, I took full advantage of having no meetings or briefings, in order to take most of the day off, especially with the poor weather forecast for the weekend. I decided to get some jobs done at the house, which means that I will need to work part of the weekend on a few Tynwald items, along with going through the DEFA agenda pack.

Late on Friday afternoon it was confirmed that a new case of COVID-19 had been identified on the Isle of Man. It follows a test on an individual who became symptomatic during their self-isolation period.

Chief Minister, Howard Quayle MHK, said: “This is the fifth positive test for COVID-19 in recent weeks, but thankfully each case has been detected in individuals who were already self-isolating. This means the virus is contained and the risk to the public is extremely low.”