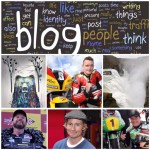 After many months of planning and saving, Ellen and I left poor Oscar (our cat) at home looking after Pam (my mum) this week, as we set off on our big adventure.

I mentioned last year, before we headed off to Scotland on our road trip, that this particular holiday has been booked for around 18 months and is a combination of Ellen’s 40th (a few years ago), our 13th wedding anniversary (Sept 23rd) and my 50th in August.

Ellen and I have been together now for 16 years and we have been very fortunate to have travelled the world together. I think we have visited over 15 countries so far, including Australia, New Zealand, USA, Canada, as well as various places in Europe.

Some parts of this particular holiday unfortunately also had a fixed date, so I knew I would have to sacrifice attending the Festival of Motorcycling this year, but I have been following the results, media articles and and emails, etc…

A big thank you to the DfE Minister, Laurence Skelly, MHK and Tim Crookall, MLC for covering my formal duties when I was off island this week.

It is also very important this year that I am able to attend the Eastern Area Plan Public Inquiry to give my evidence personally on behalf of Onchan Constituents, along with attending a parliamentary conference on 16th and 17th September.

Having posted around 167 Blogs since June 2016, it is difficult to post a short message simply saying that I am off island for couple of weeks, ‘back soon’ or something on those lines….

However, I am a little apprehensive about sharing details of our holiday, especially when I know some people are unable to take holidays this year for various reasons.

I guess this is one of the issues when you choose to post a weekly blog, but hopefully no one will object, and I am happy to share a few pictures on my personal facebook page shortly.

So it was an early start last Saturday, in order to catch up with emails before driving to the airport for 9am ahead of the first leg of the journey, which was from the Isle of Man to Dublin.

We arrived in Dublin at 10.40, but we didn’t actually leave the airport as we then took a flight to Keflavik, Iceland in the afternoon.

The original idea was to spend the weekend in Dublin and to clear immigration in Ireland before travelling to Seattle, Washington but we decided to head to Iceland instead, which is somewhere we wanted to visit.

We stayed at the Northern Lights Inn, located in a Unesco Global Geopark, and the whole area is completely covered in volcanic lava other than the hotel and Svartsengi, which is a steam geothermal power plant that provides hot water and electricity to the local community – it is a very very strange landscape, so hopefully my pictures will show this.

Back on the Isle of Man, John McGuinness secured another memorable victory in the Senior Classic TT before Bruce Anstey won the Lightweight Classic TT.

This year’s Classic TT was the Kiwi’s comeback having been battling illness over the last couple of years – so it is truly an amazing achievement.

Unfortunately, later on in the afternoon it was reported that popular rider Chris Swallow had been involved in an incident during the Senior Classic TT and died from his injuries.

My heartfelt condolences go once again to his family and friends.

On Sunday we had organised a Golden Circle tour from Reykjanes and Hafnarfloraur, which meant another early start. The first stop was the Gullfoss Waterfall, which is harnessed for electricity but also sits within a natural scenic area.

We then drove to the Icelandic Geysirs, which is a must on any Golden Circle tour. The last stop on the tour was a visit to Thingvellir, the original location of the Icelandic Commonwealth from 930 to 1262.

At the centre of Thingvellir is the Logberg (Law Rock), the focal point of the original Alþingi (Parliament), which held legislative and judicial powers, and it also was the place in which the Lawspeaker took his seat as the presiding official of the assembly of the “Althing”, in order to make speeches and announcements etc in times gone by.

Fascinating to see and compare with our own ancient Viking traditions still held at St John’s on Tynwald Day….

Fortunately, we managed to get back to the hotel before most of the high winds and heavy rain arrived with force on Sunday evening.

We didn’t get any sleep on the plane because we were travelling in bright daylight throughout the flight, which was very strange.

No concerns getting through US Immigration, which only took a matter of minutes – in fact it took us longer to find our luggage.

A quick transfer to our hotel for an overnight stop before heading back to the airport on Tuesday morning for the next leg on this adventure, which will see us fly from Seattle, Washington to Anchorage, Alaska,

Given the several different time zones we are moving through this week, I am very surprised that Ellen and I haven’t really been affected by “jet-lag” – yet… but I am sure things will catch up with us when we get home.

Reykjavík is 1 hour behind the Isle of Man, Seattle is 8 hours and Anchorage is 9 hours behind, which meant that we were wide awake and down for breakfast for 6am in Seattle.

In fact, I have been up around 4am local time (13.00 IOM time) for most of this week, but it has given me an opportunity to catch up with any correspondence etc before the day starts.

Our flight from Seattle left at 12.55 and we arrived at the Captain Cook Hotel, Anchorage for around 16.15, which gave us time to settle in.

Anchorage recorded the second biggest earthquake ever at 9.2 megathrust in 1964, which killed 131 people. In fact, I was very surprised to discover that Alaska records an earthquake every 15 minutes.

On Tuesday (27th) this week there was an earthquake of 4.1 just 9 miles outside Anchorage, but most people just see them as part of the daily routine.

On Wednesday we headed out to explore Anchorage, visiting the local museum and taking a trolley bus around the area. In the evening we went to the Glacier Brewhouse, which is a local bar and steakhouse that was packed full of locals and visitors alike.

I would certainly recommend the Brewhouse if anyone visits Anchorage in the near future.

Woke up on Thursday to the news that Onchan resident, Nathan Harrison had completed the double at the Manx Grand Prix. The 21-year-old added the MGP Senior title to MGP Junior title he won on Wednesday, which is fantastic news.

Congratulations to everyone involved in this year’s Festival of Motorcycle, which certainly generated a considerable amount of difficulties to overcome once again.

We really did enjoy looking around Anchorage over the past couple of days, but it was time to pack our suitcase once more on Thursday morning as we jumped on a coach and headed 197 miles to the Copper River Wilderness Lodge that is located in the Wrangell Mountains, and certainly offers some truly breathtaking scenery of the Wrangell-St Elias National Park.

We left the hotel in Anchorage at around 10.30am and eventually arrived at the Copper River Wildness Lodge for 17.00, but we did have a couple of stops along the way, including a short woodland walk to get a closer view of the Matanuska Glacier.

A very early start on Friday as we took the opportunity to watch the sunrise over the Wrangell Mountains – some of the outstanding scenery of Alaska.

I just hope the pictures I post online do it justice, because it was worth getting up at 5am and watching the sunrise.

After breakfast we did some leisurely walking along some of the trails around the wilderness lodge.

As for the weekend, more packing and more travelling as we set course for Fairbanks, which is about 263 miles from Copper River Wildness Lodge.