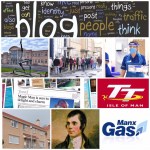 On Thursday morning Ronaldsway Airport opened up its doors as the island’s first vaccination centre. The 10 vaccination cubicles within the main airport building will be run by front-line nurses, in order to help deliver one of the biggest mass vaccination programmes seen on the island.

It was forecasted that around 400 people would receive their vaccination on the open day, and although there was plenty of parking a number of queues started to form outside the main airport building, but this was put down to the fact that many people were arriving at the airport far too early for their appointments.

Many of those standing outside were elderly and / or vulnerable and I sincerely hope it was just first day teething issues, because the photos and media coverage of the events were not the island’s finest hour…

Hopefully, the vaccination centre at Ronaldsway will now help accelerate the number of people receiving the vaccination, especially when the second vaccination hub currently at Ward 20 on the Noble’s Hospital estate will be relocated to the old Safeway / Shoprite building at Chester Street in due course.

Questions are already being asked around providing a vaccination hub in the North of the island, which does make sense from a logistics and travel point of view.

The island’s Covid-19 vaccination programme actually started on 4th January, which seems such a long time ago and by Wednesday evening this week 4,550 people on our island had already received their first vaccination, and this included 1,037 who were also receiving their second dose of the vaccine, which is fantastic news – more on those figures in a moment.

With the Ronaldsway vaccination centre now fully operational it will be interesting to see how fast the vaccine can actually be rolled out across the island, but a lot will still depend on supply of the Pfizer/BioNTech and the Oxford/Astra Zeneca vaccines in the coming weeks and months.

The UK has also just announced a new vaccine called Novavax, which has been 89.3% effective after successful trials in the UK, which looks set to be the vaccine of choice along with Oxford/Astra Zeneca in the future.

Let’s move onto other things, although not much to report on last weekend.

Monday was a strange day in many ways, because I didn’t have any meetings so I was expecting to have a relatively straightforward day. I went into the office early in order to get a few things done before I return to the office next week.

I also needed to do a little research into Robert Burns ahead of a virtual event being held via “Teams”. Once back home, the rest of the day was spent going through the House of Keys order paper and an ongoing planning issue.

I also had various phone calls and messages, mainly from childminders in respect of what financial support is available or importantly not available for their sector as a result of the second lockdown. I also had to go through a considerable amount of data and information on a housing issue before I was able to draft suitable correspondence to the local authority.

As I mentioned last week, the DOI Minister has delegated a particular very difficult task for me to look at on behalf of the Department, and it took up most of the afternoon as I went through various papers and reports received, along with doing some further research. Apologies, I can’t give further details at this moment in time on the actual project, but I am sure that the DOI Minister and the Department will be making a full statement in the very near future.

I took my final call just after 18.20 from a concerned accommodation provider who wanted to share their thoughts in respect of the Landlords Registration Bill, and the call lasted over 30 minutes.

At 19.00 Ellen and I dialled into a virtual “Robert Burns” evening, which had been organised by my colleague Claire Christian, MHK. Originally, we were meant to meet up in person, but it definitely didn’t spoil the evening in any way.

The evening still had the haggis, the speeches, the toasts and a few games along the way, and it was a great way of switching off for a few hours and to catch up informally with a few colleagues.

I was asked to do the “Immortal Memory”, I am grateful for “google”…

As for Tuesday the first couple of hours was spent at the kitchen table before I dialled into this week’s House of Keys sitting that got underway at 10am with 11 oral question and 12 written questions, along with two emergency questions to the DHSC Minister. The International Co-Operation (Protection from Liability) Bill 2021 received its first reading before we had consideration of clauses in respect of the Beneficial Ownership (Amendment) Bill 2020, Companies (Amendment) Bill 2020 and the Gas Regulation (Amendment) Bill 2020.

It was the Gas Regulation (Amendment) Bill 2020 that continues to be a thorny issue, and I think most Manx Gas customers just want to see an end to the 2015 Gas Regulation Agreement.

For me personally it is great to see this piece of legislation finally leaving the House of Keys chamber after various amendments and discussions over the last 18 months.

We now need to show the evidence and the benefits of a new agreement by lowering domestic gas bills as a matter of urgency.

The Keys sitting finished at 13.30 and this gave me an opportunity to look at the DfE agenda pack and a department paper relating to the TT Grandstand, along with returning some calls.

I then spent the next few hours continuing to go through various bits of financial data, the Public Sector Housing (General Needs) (Allocation) Policy 2019 and the Isle of Man Safeguarding Board recommendations into the case involving “Mr H”, along with writing to a local authority.

The reason for doing all of that was due to the fact that a local authority housing tenant contacted me recently after being informed that their annual rent would be increased by a significant amount per annum despite already being in arrears with the authority, along with having significant other debts.

This should have been a “trigger event” in my opinion, especially taking into account the events surrounding “Mr H”, and although it isn’t an easy case I hope the local authority will look at the individual circumstances and adjust the rent accordingly.

I stopped at around 18.00 for tea, but I then had to go through a couple of DOI department papers, including one on the Energy from Waste Plant before finishing just after 20.00.

Wednesday started with a general catch up with a few things before dialling into the DfE political meeting with the Minister at 9.30am. This was followed by the DfE Board Meeting, and with no agency update this week it was straight into the main order paper that was relatively light with only a couple of key decisions to make, but there were a couple of long discussions at the end on the Covid-19 support payments.

The meeting finished just after 12 noon and I was able to take a short break before dialling into the DHSC meeting, in which Sir Jonathan Michael and his team gave an update on the Health and Care Transformation Programme.

Unfortunately, I had to leave the meeting slightly early, in order to dial into a DfE tourism workshop meeting, which didn’t finish until after 16.30. Again another very robust meeting around the island’s border strategy, when borders could (should) open again taking into account the vaccination programme both here on the Isle of Man and the UK, and what tourism activities the industry can expect in 2021, if any…

We also discussed marketing campaigns, in order for the sector to be ready when the Council of Ministers / Tynwald gives the signal…

I managed to finish just before 17.00 once I caught up with a couple of emails.

Back into the office just after 7am on Thursday to collect some documentation and a few reports before returning home. The rest of Thursday morning was taken up mainly by several DfE motorsport meetings and going through various reports.

Hopefully, we can get some pictures of the new designs into the public domain in the very near future, and I hope it also receives support from locals and visitors alike. Unfortunately, a lot of the work being undertaken by the DfE motorsport at the moment and over the past four years will not be unveiled and truly appreciated until TT 2022 and TT 2023, which will be well into the next administration.

That said, I am proud of the motorsport team’s leadership and vision and for taking the event to a new level, it has been a genuine pleasure to work with the whole team over the last four years. The same also applies to the tourism team, they have been working tirelessly over the last year once the announcement was made to close our borders to visitors as a result of Covid-19, which unfortunately included the cancellation of TT 2020 and 2021.

Back in 2018 and 2019 the island’s tourism sector was turning a significant corner, confidence was up, bookings were up and we were driving new initiatives and ideas to promote the island, which is such a special place to live and visit.

All of that is gone, the tourism recovery will be difficult and possibly slower than the industry expects. We will bounce back in 2022….. but my hope remains that we can see some tourism activities in 2021.

It is also very rare that an MHK stays in a post for the full term of an administration, which has made my time as the political member responsible for tourism and motorsport even more special.

Anyway, I also had to go through some safety reports before finishing at 12 noon.

From there it was straight into another tourism meeting as we discussed finance and borders, which lasted around an hour. The next few hours were spent catching up with calls, correspondence and further work relating to the Landlord Registration Bill.

At 16.00 there was a Corporate Parenting Group meeting, which I chair as the Children’s Champion, which also lasted just over an hour. Again, some excellent discussion on homelessness, support into employment schemes and education work plans.

I also needed to send a couple of urgent emails to the Cabinet Office on behalf of Constituents before finishing at around 18.15.

As for Friday it ended up being one of those days…

After catching up with a few things I dialled into a DEFA and DfE tourism meeting at 10am as we discussed different ways of working closer together, especially when so many tourism activities on the island are undertaken on DEFA land.

This was followed by a DfE political meeting with the Minister, which was a general catch up. I then continued to work though various bits of legislation and guidelines attached to the Landlord Registration (Private Housing) Bill 2020.

At 13.00 I joined my DOI colleagues as we started to go through the Landlord Registration (Private Housing) Bill 2020 line by line. Unfortunately, I couldn’t agree with officers on a particular section of the Bill that related to tourism accommodation, and it resulted in me leaving the meeting.

Not my finest moment I have to say, but I felt that the weight of evidence around current legislation provision for registered tourism accommodation is very well documented. Unfortunately at the heart of this there appears to be differing legal advice to the different departments involved.

I then ended up spending the next couple of hours going through everything and checking other relevant pieces of legislation, in order to ensure that my points on behalf of tourism were valid before I drafted my follow-up correspondence to the DOI Minister.

The island’s Covid-19 vaccination programme finished the week with 5,904 island residents receiving a vaccination, which was an increase of 1,354 since Wednesday.

The Isle of Man goes out of the three-week ‘circuit-breaker’ lockdown from Monday when restrictions will be lifted.