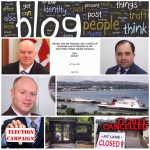 This week Stephen Hind, Director of the Audit Advisory within the Manx Government structure published his final and independent report in respect of the events surrounding February 2021 and the Covid-19 Outbreak and its Relation to the Isle of Man Steam Packet Company, which resulted in the Isle of Man entering into a third national lockdown early in March this year.

For ease of reference I enclose a link to the report:

Over the past couple of months there has been a war of words between the Chief Minister, Howard Quayle, MHK, the Health Minister, David Ashford, MHK and the Cabinet Office with Mark Woodward, Chief Executive of the Steam Packet Company who has been desperately defending the business, the staff and the reputation of the Company in respect of those events, but as a backbench MHK it is incredibly difficult to truly understand the timeline of those events back in February.

That might be one reason why this story has continued to dominate local media headlines at the moment.

Prior to the report being published the Chief Minister said that officers were left to manage the Steam Packet risk. For me personally unfortunately the publication of the report into the events has raised more questions than answers.

As I mentioned in the House of Keys on Tuesday, concerned Steam Packet staff contacted me on 9th and 10th January before I raised this topic directly with the Chief Minister and officers from the Cabinet Office at an informal meeting of Tynwald Members on 11th January, but those concerns were not taken forward at the time.

The Chief Minister also said there was a difference of opinion that emerged in February and it was important we understood that additional measures were needed to reduce the risk entering our island, and to ensure any lessons to prevent a recurrence were learnt.

He went on to say that we didn’t get everything right, and the report tells us that.

However, Mark Woodward said that any misunderstanding with Covid-19 isolation for crew members lies with the Government and not his Company.

In a statement issued he said that considerable discrepancies between the documents required under regulations, and those actually issued were troubling. He also went on to say that although the report was well executed and fair he was disappointed that very clear vindication of the crew appears to have been ignored, and it is his firm belief that the company, and the crew in particular, are owed an apology.

According to the Courier on Friday Mark Woodward sent the Health Minister a blistering letter saying that the crew were due an apology for comments made to the media on 23rd February – fair to say that the story isn’t going away.

At the heart of this story are the crew and key vessels that have kept vital supply links to the island open since March 2020, and without a single case of Covid-19 – so what did go wrong in January 2021 and will we ever know the full truth?

More on this in a moment.

As for my own activities this week it was definitely an easier week than I first thought as things started to slow down ahead of a bank holiday weekend. This weekend we should have also witnessed the first bikes heading down from the Grandstand for the start of TT 2021… Let’s hope that we can see some racing in 2022.

As for last weekend, I did actually manage to spend most of Saturday working on the garden room, but as I mentioned last week I did spend a considerable amount of time on Sunday working on a couple of election items along with preparing for various media interviews this week.

As for Monday I was in the office for normal time, but the day was dominated by just a few items. The first couple of hours were spent in the office researching and drafting various notes ahead of my first House of Keys 2021 General Election interview, which was with Manx Radio at 10.30am.

I headed up to the station just after 10am and the interview was with John Moss. I walked away from that 20 minute discussion thinking it was a terrible interview because I had to answer far too many questions as to why I do not attend Onchan District Commissioners’ meetings and on other local issues which are really for locally elected Commissioners to answer, and definitely not someone looking to stand for the House of Keys.

In reality I listened to the interview on Wednesday once Manx Radio published it online, and to be perfectly honest it was a lot better than I’d first thought. It just goes to show how your mind plays tricks on you when you are under extreme pressure to give a good account of yourself.

I also had to do a two minute video interview, which was difficult because I was sitting in front of camera, not just answering questions…

Back to the office to start going through the review undertaken by Stephen Hind into the February 2021 Covid-19 outbreak and its relation to the Isle of Man Packet Company.

The 94 page report certainly makes interesting reading and makes several recommendations in respect of lessons learnt. I also had a lot of department work to get through before I drove up to Paul Moulton’s house for my second election interview at 14.30.

Back to the office to go through the DfE agenda pack before heading home just before 17.00, because I had an electrician coming around to the house. I also managed to get a quick hour in the garden room before finishing at 19.30.

In the office for 8am on Tuesday for this week’s House of Keys, and it was hard to believe that we only had three Keys sittings left of this administration. Before the sitting I still needed to get my head down to catch up with department work and one particular constituent issue.

As for the Keys sitting, it started with my colleague Ann Corlett moving a motion to appoint Dr. Jonathan King as Secretary of the House of Keys and Counsel to the Speaker with effect from 23rd September 2021, which was fully supported by the House.

We then had an emergency question on the 2021 Census before going through the question paper that had 17 oral and 5 written questions for response, but we only reached question 8 within the allotted hour.

We then had a statement from the Chief Minister on the report relating to the February 2021 Covid-19 outbreak and its connection with the Isle of Man Packet Company, and the Chief Minister had to defend several difficult questions from Members in the Chamber.

We then had a short motion on the House of Keys standing orders before we looked at the Second Reading of the Local Government (Amendment) Bill 2021. We then went through Consideration of Clauses relating to the Administration of Justice and other Amendments Bill 2021 and Housing (Miscellaneous Provisions) (Amendment) Bill 2021 and the Liquor Licensing and Public Entertainment Bill 2021, which took the sitting well into the afternoon session.

We then continued to go through the question paper before this week’s sitting of the House of Keys finally concluded around 17.10.

I left the office towards 17.45 and once home I still needed to go through the DOI agenda pack along with picking up a few constituent issues before finishing at around 20.30.

As for Wednesday I was in the office for normal time to get a few things completed before walking over to DfE for the usual political catch up before the Department meeting, which was relatively straight forward this week.

Back to the office towards lunchtime, in order to look at a couple of ongoing Constituent issues relating to a neighbour dispute, along with trying to bring two other constituents together to sort out another issue regarding an overhanging tree.

At around 13.00 I walked down to the Sea Terminal for a political meeting with the DOI Minister before the department meeting that got underway 14.00. We had verbal reports from Ports and Transport this week, along with other divisional updates etc during the three hour meeting, which didn’t finish until 17.00.

The Isle of Man finally had some excellent weather to enjoy on Thursday and with a couple of my own meetings cancelled I was able to take advantage of the wonderful weather myself for a couple of hours. The day started with a quick trip to Tesco and B & Q before sitting at the kitchen table going through the Corporate Parent Group meeting agenda pack, along with a couple of department papers.

Towards lunchtime I got into the garden for a couple of hours, in order to cut the grass and a few overgrown hedges that were overdue a cut. After lunchtime I spent a few hours working on a couple of election items before driving to the old Jane Crookall to attend the Corporate Parent Group meeting that started at 16.00.

Friday was another quiet day in many ways with only a couple of meetings scheduled. This meant that I was able to sit in the office and work on my election campaign, in particular my letter of introduction that needs to be completed in the next couple of weeks.

I have genuinely struggled to find any free time over the past couple of months, so it was fantastic to have the time in the office to finally put my ideas onto paper.

The only meetings I had on Friday was at lunchtime in DfE as we discussed a policy around remote working, which was followed by a tourism meeting as we discussed skills shortages in the industry ahead of lifting all restrictions on travel after 28th June 2021, hopefully…