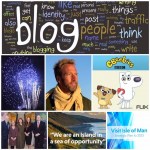 I mentioned a few weeks ago that the DfE team went to look around an office based in Douglas and that I wasn’t able to publish any further details until the Company had issued a formal press release.

Well that Company is called “Flix”, which is an island based animation studio that is located on Finch Road, Douglas. This week they announced a new TV series that was commissioned by the BBC entitled “Dog Loves Books’, which tells the story of a bookshop owner, Dog and his best friend Pug and is aimed at 4 to 6 year olds.

The first episode is entitled “Dog Loves Snark” and it will be aired on CBeebies on Monday 2nd March at 9.15am.

As for last weekend, on Saturday Ellen and I headed into town for some breakfast before doing a little bit of shopping, but I was later able to catch up with a few bits of work with the rugby on in the background.

On Saturday evening I took Ellen to the Majestic Chinese Restaurant under the Palace Hotel to celebrate Ellen’s birthday. I think it was the first time Ellen and I have been out together (just the two of us) since our Alaskan holiday back in September.

I would certainly recommend the food and the venue.

On Sunday we managed to get out for a walk along the promenade and South Quay, before I went through a few Department Papers.

On Monday the island woke up to a very light covering of snow, which caused a few minor accidents and the closure of some roads across the island.

I went into the office for normal time, but only to complete a few small jobs before driving up to Manx Radio at 9am for an interview on motorsport and last week’s budget.

From there it was straight into Onchan for a series of Constituent meetings. It wasn’t planned that way, but I actually really enjoyed the morning.

The first stop was at Springfield Court for their coffee morning and it was great to catch up with some of the residents. One particular question raised was around the 75th VE Day celebrations taking place across the island and the UK on 8th May 2020.

I hope I am not breaking anyone’s confidence, but I was fascinated to listen to one lady talking about how she spent VE Day back in 1945. The lady in question was only 17 at the time and she spent the day just walking up and down the Douglas promenade drinking lemonade.

Another lady mentioned that her mum opened up a tin of pineapple chunks to celebrate the occasion.

What great memories from a very difficult time.

From there I went down the road for a meeting with a Constituent and the DOI relating to parking concerns around vehicles being unable to enter and exit a property at certain times of the day.

A big thank you to the DOI for attending the meeting and for looking at ways of trying to resolve the issue.

I then attended a meeting with a Constituent regarding Oncology services on the island and at Clatterbridge that will need further investigation and research, along with sending correspondence to the Health Minister.

I then called in to see a couple of Constituents who wanted me to look at taxi applications and a few other issues. My final Constituent meeting was on a social housing application and a Constituent who needed some filling in the forms, which I was happy to do.

I finally got back to the office around 14.00 and the rest of the afternoon was spent at my desk until around 17.15.

It actually took me more than two hours just to catch up with e-mails.

Once home, I also needed to go through the House of Keys Order Paper and a couple of Department papers before finishing at around 21.15. I also had an exchange of correspondence with the new Health Service CEO regarding Oncology Services on the Isle of Man.

In the office just after 7.30am on Tuesday before walking down to the Villa Marina for the 2020 Tourism Industry Day in which I gave the opening remarks to welcome over 100 delegates for a full day of events at the Villa Marina.

The Visit Agency also unveiled its tourism strategy to 2023 to help attract 340,000 visitors per annum to the island by 2023.

I enclose a link to the Visit Isle of Man Strategic Plan 2023:

Unfortunately, I wasn’t able to stay because of the House of Keys sitting that got underway at 10am with the Speaker, Juan Watterson, MHK paying tribute to the Home Affairs Minister, Bill Malarkey, MHK who passed away last week.

As for the rest of the Order Paper, it started with 12 questions and 15 written questions.

The sitting finished at around 11.30am and other than attending a briefing in the Barrool Suite at lunchtime on a possible solar farm being built in the North of the Island, the rest of the day was spent in the office until around 17.15.

I was very impressed with the presentation and definitely more in favour of solar energy than wind farms, but we might need both in the future.

I was also able to go through the DfE and PAC agenda papers along with drafting various correspondence.

On Wednesday there was the normal routine of attending the DfE Minister and Political Members briefing at 9.30am before the actual board meeting, which was relatively light this week with only a couple of decisions to be made.

In fact I was back in the office before 11.30am to go through several reports and department papers.

At 14.00 there was a Public Accounts Committee meeting which was also one of David Cretney’s last meetings as an MLC before he retires.

Back to the office once more before heading home.

On Wednesday evening Ellen and I went to the Gaiety Theatre for an evening with award winning Broadcaster, Adventurer, Explorer, Writer, and not forgetting one of the original Castaway Members, Ben Fogle.

The theatre was packed but you could hear a pin drop as Ben shared his life’s journey and some of his stories around climbing Mount Everest, rowing across the Atlantic, racing across Antarctica to the South Pole, crossing the deserts in the Middle East, together with sharing some his own personal tragedies.

What an amazing individual with a very impressive CV, I don’t think anyone left the theatre feeling disappointed, a truly wonderful and inspiring evening.

With no meetings or briefings on Thursday I was able to stay at home with a mountain of reading to get through. I also spent some time researching the Bank (Recovery and Resolution) Bill 2020 currently going through the House of Keys at the moment, along with comparing our legislation to that of other jurisdictions such as the UK and Jersey.

The Isle of Man Consultation generated very few responses (6 in total), but I have some concerns around the Resolution Authority, which will be the Isle of Man Financial Services Authority.

I was also able to spend a couple of hours drafting correspondence in relation to the Area Plan for the East, which is an ongoing project.

News also broke on Thursday that former MLC and Manx Radio broadcaster, David Callister had passed away at the age of 84.

David joined Manx Radio back in 1965 and he was elected to the Legislative Council in 2008.

Back in the office for normal time on Friday for a day full of meetings.

At 9am I had a meeting with meeting with Bill Shimmins, MHK and John Coyle regarding the Bank (Recovery and Resolution) Bill 2020, which gave me an opportunity to table various questions and concerns.

At 10am the Fireworks Committee met for the first time and we elected my colleague Daphne Caine, MHK as the Chair. I then went straight into a meeting with David Gawne who is very well known within the third sector.

It was great to catch up with David as we discussed some of the challenges facing the third sector at the moment.

This was followed by a DfE workshop on the budget (income, costs and principals etc) and some of the challenges we might face in the forthcoming financial year.

Unfortunately, I needed to cancel a couple of Constituent meetings, in order to catch up with things in the office between 13.30 and 16.00.

My final meeting of the week was with an MLC Candidate and it will be a very close election. I have been very impressed with a number of candidates, but there are only four seats….

As for the weekend, I will be attending the funeral of the Home Affairs Minister, Bill Malarkey, MHK on Saturday lunchtime.