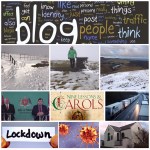 So Christmas Day is over for another year, and what year it has been…

I doubt parts of England have experienced a Christmas quite like this one, especially when more than 40 countries this week banned arrivals from the UK after serious concerns were raised around a new variant of the Coronavirus being discovered.

This meant that around 1,500 lorries (if not more) were stuck in Kent waiting to leave the UK once France re-opened its borders for trade and travel – it really is a depressing situation, especially in the run-up to Christmas.

All of this is after the UK Government introduced a new fourth tier for London and much of the South East of England last weekend. The UK Government’s original plan was to relax the coronavirus rules over the Christmas period but this has been scrapped for tier 4 areas, and those parts of the UK living in tiers 1 to 3 have seen their “Christmas Bubbles” reduced from 23rd to 27th December to just Christmas Day.

Wales has also entered into a new national lockdown earlier this week and mainland Scotland has just entered into another lockdown period that started at one minute past midnight this morning (26th Dec).

The Chief Minister Howard Quayle, MHK here on the Isle of Man called a media briefing on Tuesday lunchtime, which was very unexpected so close to Christmas – so the news was never going to be good….

Although the events in the UK are concerning, the Isle of Man has ruled out closing its border completely at this time, but that situation will be reviewed again in a couple of weeks’ time.

This means that we will remain on level 4, which is just below a total “Lockdown”. However, additional protection measures have been introduced this week, in order to help keep the Manx Community safe.

From Wednesday Isle of Man residents can choose to take a test on day one, and again on day thirteen at a cost of £50. If both tests are negative then the individual will be able to come out of self-isolation on day 14. Alternatively they can choose not to undertake a test, but they will have to self-isolate for 21 days….

The exemption process has also changed in which non-residents will no longer be able to apply for an exemption certificate to visit the Isle of Man for the foreseeable future and that unfortunately includes on compassionate grounds, but those already holding a certificate or those already in the system will be processed, and if accepted allowed to travel to the island.

It is hard to put all these events behind us, especially over the Christmas period but I do sincerely hope that everyone had a wonderful day yesterday (25th Dec) with family and friends, although we have to acknowledge that many island residents this year have been unable to celebrate the festive period with close family and friends due to the border restrictions.

I also take the opportunity to say a massive thank you to everyone having to work in the emergency services or on the frontline over the Christmas period, in order to help keep the Manx Community safe and well.

As for my own schedule this week, not much to report from last Saturday other than Ellen and I attended the Tallis Consort concert at St Mary’s Church on Hill Street in the evening. On Sunday we started the day with a walk along the Promenade and South Quay, but I was also able to get some work done over lunchtime.

On Sunday afternoon we walked up the hill from our cottage to attend the Abbeylands Methodist Chapel Christmas Carol Service, which is always a Christmas favourite for us, along with the Nine Lessons and Carols. The service was led by Marion Watterson and a massive thank you to Marion, Keith and the other volunteers for the homemade refreshments after the service.

If you haven’t been to Abbeylands Chapel for any of their services, then I would certainly recommend it in the New Year.

On Sunday evening we went into Onchan Village for this year’s Nine Lessons and Carols at St. Peter’s Church, and for me personally it is always a privilege to be able to do a reading during the service.

I have always enjoyed the two weeks running up to Christmas more than Christmas Day itself, which is normally a quiet day for Ellen and me, especially this year when we are unable to visit family in Leeds and Sheffield.

As for the rest of the week, I was in the office for 8am on Monday for the final couple of days before the Christmas holidays. At 9.30am I had a phone conference with Debbie Brayshaw, Director of Family Service as we discussed my role as the Children’s Champion, because I want to ensure that I maximise the opportunities to improve a number of services before I leave office in July.

This was followed by a Manx National Heritage meeting amongst the trustees as we discussed a future employment application, which will be advertised in the New Year. I also had to go through various DOI pink papers, along with a few Department papers.

I then received confirmation that my DOI meeting at 16.30 on Monday had been cancelled due to an ongoing Council of Ministers meeting relating to Covid-19, so I took the opportunity to head home just before 14.00. Once home I continued to work on a couple of things until around 16.00, and this included the new bus strategy ahead of a meeting on Tuesday.

On Tuesday I went into the office for normal time, which gave me the opportunity to have a general tidy up in the office. Just after 10am I had a meeting with the DfE Motorsport team as we start to look towards TT 2022, which will need to “pack a punch” after an absence of two years.

Just after lunchtime I headed down to the Sea Terminal for a Ports Division meeting, which was a general update. This was followed by a strategy and policy meeting on the Bus Vannin 2021 timetable.

The meeting finished just after 18.20.

I was able to take most of Wednesday and Thursday off, in order to get any final Christmas shopping done. Despite very heavy rain early on Wednesday morning I thought I would still run the gauntlet of M & S at 7.30am. Very fortunate to be able to find a space in the M & S car park and to be honest the store wasn’t as busy as I was expecting.

I had a couple of constituent issues to deal with throughout the day, along with several department papers etc, but I was still able to meet up with a friend for a game of snooker at lunchtime.

Thursday was spent at home and I even managed to get into the garden for a few hours to split some of the wood into logs for next year. On Thursday tea time Ellen and I attended St. Peter’s Church for their “Crib Service”.

As for Christmas Day, once Ellen and I had opened up our presents, we headed out for a walk up to the summit of Snaefell, which is slowly becoming a Christmas Day tradition.

It was bitterly cold and the ground up to the top was covered in snow, which was very deep in places, so we can definitely say that we had a “White Christmas” this year.

A fantastic walk and once home we opened up the champagne that Ellen won in a raffle a couple of weeks ago, along with having our turkey Christmas dinner, before settling in front of the TV and fire for the rest of the day.