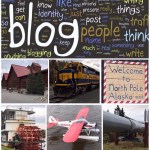 This week we continued our adventures across Alaska, which is a truly beautiful state to explore and visit – I have already posted a few more pictures on my personal facebook this week but I will post a couple more shortly for those people that might be interested.

We even got to meet Father Christmas this week – I kid you not, but more on that topic later.

Last Saturday Ellen and I left the Wrangell-St Elias National Park just after 8am and headed for Fairbanks, Alaska. The journey was about 263 miles by coach but we did make several detours and stops along the way before reaching our final destination at the Fairbanks riverside hotel for around 17.00.

We followed the Trans-Alaska Pipeline System for most of the day, which has a fascinating history, and it certainly split public opinion back in the 1970s, and still today in certain quarters.

The pipeline runs for 800 miles across the whole of Alaska from Prudhoe Bay to Valdez and includes 11 pumping stations. It also crosses over three mountain ranges and more than 500 rivers or streams along the way. Around 400 miles pipeline is actually above ground because of the solid permafrost that is located in certain parts of Alaska.

Oil in Prudhoe Bay was first discovered in 1968 but they didn’t actually start building the pipeline until March 1975 because of environmental, legal and political debate.

In fact it was only after the 1973 oil crisis that caused a sharp rise in prices across the United States that permission was finally granted. Surprisingly the pipeline was completed by 1977 despite facing major difficultly with engineering, extreme cold and very isolated terrain.

The first oil moved through the pipeline in June 1977.

It is also worth mentioning that since the installation of the pipeline, Alaska has now moved from being the most heavily taxed state to the most tax free state in the United States.

We also stopped off at the North Pole… well, I mean North Pole, Alaska, which actually has a Christmas Shop that is open all year round with Santa sitting in his little grotto listening to Christmas music – a very strange experience in August.

Believe it or not, North Pole also has a St Nicholas Drive, a Santa Claus Lane and a Mistletoe Avenue. I feel sorry for the poor residents living there 365 days of the year.

It genuinely felt like a theme from “Tales of the Unexpected”….

On Sunday we headed down the Chena River in Fairbanks on the Riverboat Discovery III, which turned into a very special day. After providing us with coffee and donuts, the company had then organised for a seaplane to actually land and take off right next to our boat, which was amazing to watch.

A little further up the river we called in to see Dave Manson who was an Alaska dog sled champion, along with obtaining an insight into the lives of his Alaskan huskies.

The final stop along the river was at Chena Village, which resembled an original Chena Athabascan Indian Village of the early 1900s – this was again something very special, I just
hope the pictures I post give a flavour of what we actually experienced from walking around the village.

In the afternoon Ellen and I went panning for gold at the Gold Dredge 8, which is about 10 miles outside of Fairbanks.

Unfortunately, we didn’t find our fortune – Ellen managed to pan $9 of gold and I panned $12, but still great fun.

On Monday we packed our cases once again and headed to the Denali Wilderness Lodge, which was only 121 mile down the road from Fairbanks – so we arrived in time for lunch.

Later on we went on a five hour natural history tour of Denali National Park, which was a little boring to start with, if I am being honest, despite the stunning scenery of the National Park.

However, things changed very quickly when we came across two male moose having a fight next to the roadside, which is extremely rare to see according to the tour guide….

The landscape of Alaska continues to be breathtaking and it is hard to imagine that the landscape will be covered in snow within five weeks.

So far we have seen Moose, Caribou, Bald Eagles, Artic Ground Squirrels, a Snow Hare and a Willow Ptarmigan, but no Bears unfortunately yet….

More packing and travelling on Tuesday as we left Denali National Park to travel the 112 miles up the road to the McKinley Wilderness Lodge, located in the Denali State Park.

Most of this particular journey was at a height of around 2,500 feet above sea level and unfortunately the weather had turned and most of the landscape around the Denali State Park was covered in mist, but it certainly didn’t spoil the day.

We arrived at the Park for lunchtime and with no activities scheduled on Tuesday afternoon I was able to catch up with some work and washing etc. We did however still manage to take a walk in the rain up to something that was described as a ‘treehouse’, although it wasn’t actually a tree house, but still good to see.

It was still raining on Wednesday morning when we left McKinley Wilderness Lodge at around 11.30am to take our final coach trip to Talkeetna, 50 miles away.

The weather had certainly improved by the time we reached Talkeetna and a very isolated railway track there.

From there we changed transportation and jumped onto the Alaskan railway train to Whittier, travelling back again through Anchorage where our Alaskan journey started over a week ago, which seems such a long time ago…

I think both Ellen and I were really looking forward to the train journey, as the carriages offered panoramic views of Alaska’s amazing landscape. The actual train journey from Talkeetna to Whittier was over 5 hours 30 mins, but the trip went by in a flash given the scenery outside.

We have also been very lucky to meet so many amazing people on this particular holiday. I feel like a salesman times, as I have been selling the Isle of Man to Canadians and Americans etc, and I am also selling Alaska to the folks back home, which I would add onto anyone’s bucket list.

We arrived in Whittier for around 19.00 and it was straight off the train and onto the Island Princess Cruise Ship, but no time to stop as we needed to get through security and to attend the evacuation drill on the ship.

A very long and special day, especially the train journey through Alaska, including passing the stunning coastal area of Turnagain Arm. We finally managed to get something to eat at about 21.00.

I guess the only disappointing part of Wednesday was witnessing some of the devastation caused by very large wildfires that have swept through Alaska over the past few months, mainly because the region has experienced very warm weather this year.

Thursday morning was spent relaxing and exploring the ship, along with catching up with some items of work which I had brought with me.

In the afternoon the Island Princess entered Disenchantment Bay and from there a smaller boat pulled alongside and took on board a tour group, including Ellen and me, to take a closer look at the Hubbard Glacier, which remains one of Alaska’s most famous landmarks.

Before we even reached the Glacier, we finally got to see two bear cubs running along the shoreline and playing, which was yet another highlight from this amazing holiday.

The Hubbard Glacier is located in the Russell Fjord and is the largest tidewater glacier in North America. The highest source of snow accumulation is around 11,000 ft and it is about 76 miles long.

It Is hard to describe the cracking of thunder that you actually hear all around you before a piece of the glacier falls into Russell Fjord.

It is a truly memorable sight, and something we certainly will not forget.

The rest of the day was spent enjoying everything the ship has to offer including a wonderful show in the evening.

Friday was a day on board the cruise ship, which entered the Glacier Bay National Park and proceeded to travel 75 miles inward along some of the most stunning scenery we have seen so far, including the Margerie Glacier, the Johns Hopkins Glacier – particularly special as it is rarely accessible by cruise ship – and the Lamplugh Glacier.

As for the weekend, Ellen and I have booked some amazing activities to finish off the holiday – more on those activities next week.