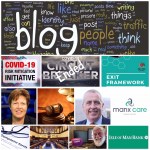 After almost seven weeks of the latest “Circuit Break” the Isle of Man Government has finally ended the third national lockdown, and hopefully it will be the final lockdown due to the Covid-19 pandemic.

With no community transmission cases of Covid-19 for almost three weeks and with only a handful of active cases on the island, the signal was given to end social distancing, ask people to return to work and for non-essential shops to re-open, but the biggest restriction on island life remains around our controlled borders.

Hopefully, that particular point is now being addressed after the Manx Government finally published a revised or more simplified “Exit Framework” on Thursday afternoon, which now gives island residents a clear message that we must learn to “live in a Covid World”, but at the same time trying to return to a position of unrestricted travel to the British Isles for the majority.

With a fair wind the Isle of Man will gradually move towards the transition stage on 1st May, which will introduce a seven day isolation period for family, partners and property owners returning to the island. On 29th May the island will allow non-resident mitigation travel that will support businesses etc.

The final stage is unrestricted travel that could be introduced from 28th June.

I enclose a link to the Exit Framework for ease of reference;

All that said, the island has already had its first serious test around mitigation and living with Covid-19, which happened within only a couple of days after coming out of our third national circuit break – more on that in a moment.

As for my own activities this week, I spent the whole day on Saturday building the garden room, which is starting to take shape. With the help of Ellen we managed to get the structure built and the roof rafters on by the end of the weekend, but I still needed to finish early on Sunday, in order to continue working through the Tynwald order paper.

We have only been working on this particular project over a couple of weekends now, but hopefully I will have it fully finished over the next 4 or 5 weekends.

On Monday morning I went back into the office just before 8am, and it was great to catch up with Tynwald colleagues that I haven’t seen for several weeks. Most of Monday was spent in the office catching up with various bits of administration and working though the Tynwald order paper, along with drafting and sending out several constituent letters.

At 12.30 we had a Tynwald Members briefing in the Barool Suite on the island’s “Exit Strategy”, which was based around the workshop that was held virtually the previous week. A very good presentation and you could see that the Council of Ministers and the Cabinet Office had listened to many of the views / suggestions put forward by Tynwald Members.

That meeting finished just after 14.00 and from there I had a meeting with the new Director of Social Care, along with a meeting with the Head of Tourism. I also needed to respond to a couple of Constituent issues, but I was able to take advantage of the good weather and get into the garden for around 15.30 until 18.00.

On Monday evening I continued to work through the Tynwald papers until around 21.00.

Back in the office before 8am on Tuesday for this month’s Tynwald sitting, which got underway at 10.30am with 21 oral questions and 35 written questions. Ahead of the sitting I managed to finish off any remaining items on the Tynwald Order Paper, a couple of Department papers and a few ongoing Constituent issues.

The question paper took the sitting up to lunchtime at 13.00 and after grabbing something to eat there was a Tynwald Members presentation by the Speaker, Juan Watterson, SHK on behalf of the Tynwald Standing Orders Committee.

The presentation looked at the 11 recommendations made by the Committee, which will change how Order Papers and Question Papers are structured after the 2021 House of Keys General Election.

Straight back to the Tynwald Chamber for a statement by the Chief Minister, Howard Quayle, MHK on Covid-19. Unfortunately, there was some confusion when the Chief Minister made reference to the island’s “Exit Framework” document several times, but Tynwald Members had yet to see the final published report.

This was followed by the Tynwald Standing Orders Committee report, which I have already mentioned and the Court accepted.

We then had a report from the Constitutional and Legal Justice Committee, which reviewed the island’s legal system.

The Committee Chairperson, Jane Poole-Wilson, MLC delivered an excellent speech around the recommendations being proposed in order to help reform the Island’s legal system. Other than a few amendments by the Council of Ministers the report and its 11 recommendations were accepted by Tynwald.

Let’s hope that the report and its recommendations lead to some positive changes to the island’s legal system, especially around the role of the Advocates’ Disciplinary Tribunal, because I know on a personal level I found the whole process very difficult and I wouldn’t want to go through that again.

The Speaker, Juan Waterson, SHK again on behalf of the Tynwald Management Committee recommended that Mr. A L Ian Cottier should be awarded the Tynwald Honour on 5th July 2021, which the Court fully endorsed. The final item of the day related to the adoption of the Confederation of Passenger Transport Code by Bus Vannin, which was halted at 20.00 when Tynwald Court finished for the day.

Once home I still needed to catch up with a few urgent matters before finishing for around 21.15.

Back in the office before 8am for day two of this month’s Tynwald sitting, and ahead of the sitting I still needed to go through several department papers, which took around two hours to get through. Trying to juggle three departments and the House of Keys and the Tynwald Order Papers can be challenging at times, but I enjoy it.

Tynwald got underway at 10.30am with the continuing debate around the adoption of the Confederation of Passenger Transport Code by Bus Vannin, which was approved by the Court. This month’s sitting continued with a small debate on the election observation for the September General Election here on the Isle of Man, along with a debate around the Senior Race Day Bank Holidays, and when should that extra holiday date be held.

Mid morning the Government issued a statement confirming two new cases of Covid-19, which is not unusual given everything the island has gone through over last 13 months, although these two particular cases were described as a concern.

Later on in the week the Education Minister, Alex Allinson, MHK confirmed that one of those cases related to a primary school in the North of the Island.

I know several Constituents have contacted me this week asking if the Isle of Man could go back into lockdown, but unfortunately the reality is that we have to start living with the potential threat of Covid-19 in the community.

With more than 53,000 island residents already receiving their first vaccination the actual level of risk has reduced, and from what I am seeing none of these decisions are easy to make….

The final item on the morning session came from my colleague from Middle, Bill Shimmins, MHK who asked Tynwald to recognise the need for an effective complaints process for both DHSC and Manx Care, which was fully supported.

I think all Tynwald Members could provide examples in which the DHSC complaints process has been left wanting, and with patients left with little or no option available to them when making a formal complaint around a particular issue or relating to a service that has fallen below a certain level. It is now up to DHSC to bring forward full details by November 2021.

With no meetings or presentations at lunchtime on Wednesday I was able to catch up with a few things before this month’s Tynwald sitting continued at 14.30 with Supplementary Order Paper No. 2 and a debate on the revised Exit Framework document.

The latest framework gives the tourism sector and island residents some clarity, and although I had a speech prepared most of my comments were picked up within the first four of five speeches.

That debate took us up to teatime and after the break at 18.10 we went through Supplementary Paper No, 1 before reverting back to the main Order Paper. There was an interesting debate brought by Juan Watterson, SHK with regards to Isle of Man Bank and their recent decision to charge island charities an annual fee, along with additional charges for depositing cash etc.

I sincerely hope that Isle of Man Bank officials were listening to the debate, because the message from Tynwald was very clear – please reconsider the decision, especially when you call yourself a Community Bank.

There was then a general debate on the funding for nursing care, residential care, and care at home. I think most Tynwald Members questioned the timing of this debate, especially when there was a long discussion on the same topic back in July 2018.

I don’t think anyone would disagree when I say that the current system for funding nursing care is inadequate and needs radical reform. Personally, I think this is a generational issue and can only be resolved by asking island residents in their 20s, 30s and 40s to start paying a little more NI Contribution, in order to guarantee future funding of nursing care if required, but at the same time also encourage people to stay in their own homes for longer, and with more community services being delivered on the ground.

Making people sell their homes to pay for nursing care isn’t right on any level…..

The Education Minister then gave the Court an update on the three new Covid-19 cases reported on Wednesday afternoon. The final item was Supplementary Paper 3 before this month’s Tynwald sitting finished at 20.15.

As for Thursday I was in the office for 8am and the first job was to go through the DOI Ports Divisional Papers before a meeting that started at 9.30am. That meeting only lasted a couple of hours, and from there I was able to start catching up with various bits of work and department papers.

Just catching up with emails took almost an hour, but I was able to take a couple of hours off late in the afternoon, especially given the excellent weather that the Isle of Man currently enjoying.

On Thursday evening I still had a lot of department work to get through before finally finishing for 20.00.

As for Friday most of the morning was spent at my desk in the office as I needed to send a couple of correspondence, along with a personal reference request that I was happy to provide on behalf of a friend.

I also able to get through the House of Keys Order Paper for next week before walking over to DfE for a motorsport presentation, which lasted around an hour. I had two meetings with the DfE Minister on a couple of topics.

As for the weekend, I will definitely take advantage of the dry weather spell in order to push forward with the garden room, especially when I need to put the roof on.

I guess part of Sunday will be spent working on a number of projects.