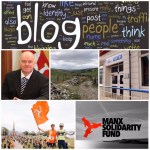 As the Isle of Man continues to settle into the “new normal”, a number of non-essential shops have started to re-open this week, along with lifting various restrictions on certain sports and other activities etc.

These businesses will still have to observe and introduce similar guidelines to those already put in place by the island’s supermarkets etc.

It is fair to say that as a society we don’t like queuing or waiting, especially men, but over the past few weeks we have come to expect that we will now have to wait a little longer when entering a shop, and the fact that the person standing at the till will be behind a massive sheet of plastic.

Unfortunately, there is still a lot of fear around the “unknown”, but the overall number of confirmed Covid-19 cases on the island continues to fall.

An Island Global Research paper was recently undertaken on Guernsey, Jersey and the Isle of Man in which they asked various questions on how the Crown Dependancies have handled Covid-19 over the past few months.

The first question asks do you agree or disagree with the statement “the exit strategy that is proposed for my island is the right approach”?

For the Isle of Man 45% agreed and 13% strongly agreed that our Government is taking the right approach in respect of the Covid-19 exit strategy.

For Guernsey the figures were even higher, with 42% agreeing and 41% strongly agreeing with their Government’s exit strategy, so the Isle of Man still has some work to do If we are to exit successfully.

I enclose a link to the actual report.

More on the latest Covid-19 figures for the Isle of Man in a moment.

I definitely cannot move on to this week’s activities without mentioning the fantastic achievements of Christian Varley who ran 19 marathons in 19 days, which is just under 500 miles…..

After almost three weeks of mental and physical strain Christian ran his final marathon from Peel on Tuesday and he was greeted to a hero’s welcome by family and friends as he arrived at the Royal Chapel at St John’s on Tuesday evening before running the final few steps onto Tynwald Hill.

The Lieutenant Governor, Sir Richard Gozney was also on hand to congratulate Christian, who has raised over £80,000 for the Manx Solidarity Fund.

Congratulations to Christian on his amazing achievements.

As for last weekend, we took full advantage of the excellent weather to spend time in the garden and to do various bits of painting. That said, I did have to deal with a couple of urgent constituent issues, and again I am very grateful to the Health Minister, David Ashford, MHK for his help with one particular mental health issue, which has raised so many questions.

The weather forecast for Sunday didn’t look promising, but we still managed to get a walk in before the rain arrived mid afternoon.

We walked from our home in Abbeylands, Onchan, down through East and West Baldwin. From there it was a slow climb up to “Windy Corner” for coffee and sausage rolls despite the very windy conditions.

The climb down from the mountain for some reason was more difficult because the formal footpaths kept disappearing, but it didn’t spoil the walk or the stunning views across the island.

Again, the guidebook wasn’t very accurate when it said 8 miles as the actual distance was 10.3 miles according to our GPS watch.

Unfortunately, I feel that figure will rise even further but things will start to settle down, and eventually start to fall as more and more sectors return to work.

If nothing else this highlights the difficult task that the Government will face in the coming weeks and months, in order to get this island working again, but under the restraints of the “new normal” with social distancing and restricted travel etc.

Again, I enclose a link to the actual report, which isn’t the best read…

As for me, I was up slightly later on Monday as I could still feel the effects of Sunday’s walk in my legs, but I still managed to get into the office for around 9am and the morning started with picking up several constituent issues and preparing for Tuesday’s Tynwald sitting.

I was back home just after 11am in order to go through the Home Affairs agenda pack and to catch up with some reading, which is continuous at times.

At 12 noon there was a Tynwald Members’ briefing, which was undertaken by the Cabinet Office as they outlined their legislative programme for the rest of 2020, along with giving an update on the work they have undertaken over the past couple of months.

This was followed by a Home Affairs Department team meeting that lasted a couple of hours, but I had a few connection issues towards the end of the meeting.

At 16.00 there was an urgent tourism meeting as DfE officers, the Visit Agency Chairman and myself went through a couple of funding papers, which I was politically concerned about.

This particular meeting highlighted the difficulties that MHKs face from time to time, especially when looking at a particular policy that needs to go the Department and Political Members, Treasury and the Agency, and this is all before the wider scrutiny of the industry and the wider general public.

After a quick walk on the promenade on Tuesday I started work at 8.15am, but the next couple of hours flew by as I needed to respond to a raft of phone calls, along with responding to various decision papers relating to the tourism sector.

This month’s Tynwald sitting got underway at 10.30 with 4 oral questions and 3 written questions before the Chief Minister, Howard Quayle, MHK gave an update on Covid-19 that generated a number of questions from Tynwald Members.

Personally, I questioned the Chief Minister once again on how information and key announcements are being given to honourable members during this Covid-19 pandemic. Unfortunately, backbench members on occasions are simply not receiving vital updates and key announcements in a timely manner or the information is being given just a few minutes before the daily media briefings, which I feel is democratically unacceptable.

I understand the pressure that the Chief Minister and the Council of the Ministers might be under at this difficult time, but as an elected Member of the House of Keys I have a right to be fully briefed before certain key announcements are made, especially where those decisions normally generate considerable comments or questions from Constituents looking for further advice or help.

It isn’t the first time that I have raised these concerns, and I can only hope that the Chief Minister looks again at how he and the Council of Ministers keep Tynwald Members informed throughout the Covid-19 pandemic.

We managed to finish the main Tynwald Order Paper for around 13.15. This offered a short window of opportunity to catch up with a few phone calls and emails before Tynwald Court reconvened at 14.00 for two Supplementary Order Papers, which started with a statement by the Policy & Reform Minister on the legislative programme.

This month’s Tynwald sitting finished just after 15.45, but once I had caught up with various things I was able to finish for around 18.30.

With this month’s Tynwald sitting finishing in a single day and with one eye on the weather over the weekend, I took the opportunity to mix and match my time on Wednesday.

First job was to review a couple of Department papers and to draft a couple of long emails just after 6.30am. I then decided to put a couple of research projects on hold until the weekend, in order to spend a few hours in the garden replacing the roof on our wood store, which I built a few years ago….

I still needed to keep one eye on emails and phone calls throughout the day, along with having a catch up meeting with the Head of Tourism before finally finished for around 19.30.

A quick walk with Ellen on Thursday morning before heading into the office just after 8am to print off various reports and papers, which I will need over the next few days.

Back home to start going through the Public Accounts Committee and Visit Agency agenda packs, along with dealing with a number of Constituent matters.

At 12 noon the Public Accounts Committee got together ahead of the next evidence session that was being scheduled for Friday morning.

Just enough time to return some calls before dialing into the Visiting Agency meeting that got underway at 16.00. An excellent meeting amongst the agency members as they try to get through a massive number of issues facing the island tourism sector at the moment.

The meeting lasted a couple of hours, but I was able to finish for around 19.30 once I had caught up with calls and emails.

Early start on Friday as I needed to prepare for the Public Accounts Committee (PAC), along with a DfE meeting that had been brought forward.

The day started just after 7am with these particular papers, and although the Tynwald officers do a wonderful job to help prep members ahead of evidence sessions it is still good to double check the details etc.

At 9.30am we had a DfE meeting as the political members considered a number of tourism related papers, which were difficult.

I had to leave that meeting slightly early to join the PAC ahead of their latest evidence session with the Chief Minister, Chief Secretary, Dr Ewart (Director of Public Health), Kathryn Magson (Interim CEO DHSC) and Dr Ranson (Medical Director) that got underway at 11am.

Again the evidence session was restricted to an hour, which makes the whole process a little rushed, but we were able to table the relevant questions within the allotted time.

Once the session finished I just had a few minutes to return a couple of calls before a further PAC meeting that went over the evidence session, along with looking ahead to next week‘s evidence session.

From there it was straight into a pre-meeting involving Home Affairs meeting relating to the Justice Reform Bill. At 14.00 the meeting continued but this time also included members of a Tynwald Scrutiny Committee.

At 15.30 there was a further DfE meeting, in order to address some ongoing discussions around the island tourism sector.

That particular meeting lasted around an hour and once I caught up with e-mails and a couple of calls I was able to finish for around 17.15.

We ended the week on the announcement that there were no further coronavirus cases confirmed on the island, which is excellent news.

The total number of confirmed cases remains at 336.

As for the weekend, I am hoping to spend some time in the garden along with heading out for a walk but the weather forecast doesn’t look good at the moment. I also need to start researching a particular topic before submitting some correspondence.

A copy of that correspondence will be posted online in due course.