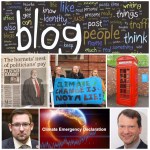 Last month my colleague, Daphne Caine, MHK tabled a motion that “Tynwald believes that the Isle of Man faces an environmental and climate emergency; and is of the opinion that the Government should allocate the necessary resources to take urgent and significant action”.

It is worth mentioning that back in October 2018, the DEFA Minister Geoffrey Boot, MHK said that the Government remained committed to Tynwald’s climate target, which included an 80% reduction in greenhouse gas emissions by 2050, but added that the aim was “ambitious”….

Fast forward 9 months and we now have a Climate Change Emergency in which the Chief Minister, Howard Quayle, MHK confirmed the Isle of Man would now follow in the footsteps of other jurisdictions, local authorities and national governments overseas.

Maybe the motion tabled last month forced a change of heart from DEFA and the Council of Ministers, but I have a feeling that it relates more to the fact that there were several protests organised by Isle of Man students over the last six months – and good on them.

Personally, I have tried not to jump into the Climate Change Emergency debate so far, mainly because the topic continues to look like a political football being kicked by everyone except for the big polluters of this world – USA, India, China and Russia just to name a few….

Instead I have allowed myself to simply listen to the debate and to follow the story both locally and internationally until I can establish the key facts on a topic that will certainly affect generations to come.

A big thank you to the Douglas resident who sent me a book entitled “Inconvenient Facts”, which I will read over the summer.

The recent consultation on the Climate Change Mitigation Strategy 2020-2030 here on the Isle of Man showed very clearly that the Manx public fully recognises climate change and believes that some action should be taken, or at least the Isle of Man should consider a change of direction in respect of net zero carbon emissions.

However, the survey also showed that the Manx public are not willing to fund any proposed changes which could potentially give future governments a major headache.

More on this important topic later…..

Another story this week that caught my eye in the Isle of Man Examiner was entitled the “Hornets’ Nest of Politicians’ Pay”, which gives an alternative look at MHKs’ and MLCs’ pay from the eyes of Alistair Ramsay who stood for MLC himself back in February 2018.

Alistair says that 88% of our National Parliament is sitting comfortably inside the government tent, which is an accurate figure, but it certainly doesn’t paint a full picture.

There is no mention of the fact that we are after all a small jurisdiction or a small parliament in which everyone is expected to play their part, but that also doesn’t mean we are collectively tied to central Government or the Council of Ministers.

That said, I do agree with Alistair when he says that the system may not make Members puppets of the regime, but it is bound to influence behaviour and it certainly affects public perception of political independence – I guess that relates to the Departmental uplifts that are available to MHKs and MLCs.

I can’t speak on behalf of the President, Speaker or MLCs because I have never held those positions, but as an MHK I personally still believe that I am a truly independent candidate and that my decisions are based around my 2016 manifesto.

As I mentioned in last week’s Blog, I think most MHKs now consider their role to be full-time.

But it could possibly be treated as part-time: once you are elected to the House of Keys, you could simply choose not to answer any constituency correspondence and to refuse to sit on any Government Departments.

You could even refuse to do all media interview requests.

The bare minimum that an MHK must do is to attend all Tynwald and House of Keys sittings wherever possible, along with attending a few formal functions along the way…..

So, yes I guess the role could be part-time….. but having gone through the election process when standing, I certainly doubt anyone once elected wouldn’t do their absolute best on behalf of their Constituents and this island.

I actually had to google the word “Pooterish”, which relates to self-importance and guess Alistair is also right on that point, because my Blog is a personal view from within the corridors of Tynwald, and I am proud to give had that insight over the last three years.

My Blogs can be repetitive at times, but that is the role – Department Meetings, Constituency Work and Parliamentary Work – but no two days are the same…..

Most of Monday was spent in the office and the first couple of hours were spent going through questions and reports relating to the Energy from Waste Plant ahead of a meeting I had scheduled with the DOI at 11am.
Unfortunately, this meant that I missed the first meeting between Tynwald Members and DEFA on Climate Change, but I was able to attend the second meeting amongst the backbench Tynwald Members, which started at 12 noon.

At 13.15 I met up with an old friend who was visiting the island this week from Australia, which gave me an opportunity to show Chris and his wife Mel around the Tynwald Chambers, and to have a catch up because we haven’t seen each other for several years.

The last couple of hours were spent in the office before leaving at 17.15.

Most of Tuesday was taken up by this month’s Tynwald sitting, which started at 10.30am with 20 oral questions and 11 written questions.

The Order Paper itself was relatively light, but there was a further two hour debate on Climate Change, which had two additional amendments.

Personally, I felt the amendment tabled by Lawrie Hooper, MHK, that the island should aim to achieve net zero carbon emissions by 2035 and to set up an independently chaired cross-Department working group, was the right course of action.

In the end Tynwald supported the amendment tabled by Ralph Peake, MHK that was almost identical but didn’t give a fixed dated, other than bringing back an action plan by January 2020.

This month’s Tynwald sitting finished at 17.30.

As Tynwald finished early I was able to attend Government House for a billiards match against the Cronk y Voddy Club.

As for Wednesday, I still went into the office for 8am and most of the day was spent at my desk except for attending an Isle of Man Commonwealth Parliamentary Association, which lasted around 90 minutes.

I also took the opportunity to start going through the Public Sector Pensions (Amendments) Bill 2019 and the Sexual Offences and Obscene Publications Bill 2019, which is a massive piece of legislation.

In think in total I sent out 30 to 40 emails on Wednesday covering various topics, along with going through a couple of Department papers and the Visit Isle of Man Agency agenda pack.

Again, it is surprising how quick the day goes…..

On Wednesday evening I needed to go through a couple of reports along with having a long conversation with a major landlord on the Isle of Man in respect of the Tynwald Select Committee which is looking into accommodation for vulnerable adults.

I was back in the office on Thursday for the normal time to catch up with a couple of things before walking over to DfE for the Visit Isle of Man Agency meeting, which started at 9.30am and didn’t finish until around 12.45.

A very good meeting with a lot of discussion around the TT, visitor numbers and ongoing projects etc.

Back to the office after that, which gave me an opportunity to draft some letters relating to a boundary dispute and an overgrown hedge.

Just when I thought I was on top of things a constituent called to look at a particular piece of legislation that will be going through the House of Keys in the near future.

Up very early on Friday, in order to take Ellen to the airport for 6am.

From there I headed straight to the office and the first three hours were spent drafting a single letter template, which relates to a potential serious planning issue.

I know that sounds an incredible amount of time to draft a single letter, and it is… but depending on the importance and how it is being used, you have to get the information right, which involves cross-referencing legislation, key points and any guidelines etc.

Again, this is just another insight into the work that you have to undertake as part of this role. As MHKs you do spend a considerable amount of time writing and sending correspondence. I certainly have written more letters and emails in the last three years than possibly in the previous 30 years…

Just before 10am I headed into Onchan to meet up with a Constituent who is embroiled in a dispute which is heading into the Courts.

I couldn’t really offer much advice at this stage other than offering a level of support for what will certainly be a difficult period.

Any mention of disputes and people heading to the Manx Courts certainly gives me shivers as it brings back painful memories of my own land dispute.

From there I headed back to the office and straight over to the DfE for a joint political workshop with the DOI Minister, DOI CEO and the Director of the Airport and the Sea Terminal, along with other officers.

A very interesting meeting, in which we discussed the island’s routes and new potential new routes, which could potentially benefit locals and visitors.

Back to the office to finish off a few things before driving into Onchan for couple of Constituent meetings, then heading home at 16.30.
Nothing really scheduled for the weekend, but I am hoping to get in to the office on Sunday for a couple of hours.

On a final note, it has been a difficult week and I am glad to see the back of it – I certainly could have started a fight in a phone-box this week, and I probably did at times…..