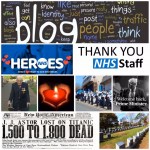 Over the past few weeks since the Coronavirus (Covid-19) started to seriously affect our daily lives, I have seen so many heartfelt and sincere messages to describe our frontline staff that continue to work on our behalf, and under prolonged periods of extreme pressure at times, in order to keep us all safe, secure and protected.

These guys are genuine heroes and heroines, due to their sacrifice and selflessness in these extremely difficult and challenging times, and I sincerely hope that history records that.

The UK Prime Minister, Boris Johnson left the St Thomas Hospital in London this week having spent a number of days in intensive care after catching Covid-19.

The Prime Minister said that he had left hospital after a week in which the UK NHS had saved his life, no question, and it is hard to find words to express his debt, but he also took the opportunity to thank everyone for the effort and for the sacrifice that everyone is making at this moment in time…

I certainly echo those comments and thoughts, and I sincerely hope that some of them are duly recognised in the Queen’s Birthday Honours.

I also read another article on how Covid-19 has utterly transformed the UK over the last month or so, but at what cost…?

The use of transport has declined, especially vehicles (cars) which are down by around 70%, and buses, the tube and trains are down by around 80% to 90%. This has resulted in a reduction in the daily average nitrogen dioxide (NO2) compared to 2019 data and as a result improved the air quality across the UK by around 40%.

However, this has come at a heavy cost with more than 725,000 people having applied for Universal Credit since the lockdown began in the UK, and that figure continues to rise, along with a sharp 25% increase on the number of domestic abuse calls being made.

There is also growing concern from businesses and workers looking for more information on when the things will recover and when governments across the world will be lifting some of the restrictions that have brought most economies to their knees over the past couple of months.

Another story that caught the world’s attention is 99-year-old war veteran, Captain Tom Moore who was looking to raise £1,000 for the NHS by walking 100 laps of his garden.

More than 800,000 people donated and so far he has raised more than £20 million and the figure continues to rise – what a fantastic gentleman….. truly amazing.

With the island enjoying some excellent weather over the Easter weekend, both Ellen and I were able to get into the garden to cut back the very rough ground next to the riverbank that runs alongside our cottage in Abbeylands, Onchan.

On Sunday morning we headed onto the promenade early, in order to avoid most of the rain that was due to arrive mid morning. I then went into the office for a few hours to catch up with a few things, along with logging into a joint DfE and Treasury team meeting that had been called at 10am.

The meeting was scheduled in order to discuss the current Covid-19 situation and the next stage, which will focus on kickstarting the Manx economy again, and desperately trying to get businesses and trades back to work, but this will almost certainly be done in a staged approach.

I managed to get home for lunchtime and I spent the next couple of hours drafting various correspondence.

Late on Sunday afternoon news broke that a second Manx resident had lost their life to Covid-19. This time it was a retired police office, Richard Lloyd from Ballabeg in the south of the island.

The Chief Constable, Gary Roberts led the tributes by saying it was the saddest day of his 36-year police career, and there were also fitting tribute by his colleagues who stood outside the main Police Headquarters for a moment of silence.

My thoughts and prayers are with his family and friends during this difficult time.

Monday was a bank holiday, but I still headed onto Douglas Promenade just after 8am for the usual walk. The rest of the morning was spent catching up with various bits of administration and emails etc, along with returning a large number of calls.

At 14.00 there was a virtual meeting with the Department of Home Affairs, which was more of an introduction, having only joined the Department a couple of weeks ago. The meeting only lasted around an hour, but it was good to catch up with everyone.

From there I was able to take the rest of the day off.

As for Tuesday, I was again on the promenade for just after 6am and then straight into the office to catch up with a couple of things, but I was still home and working from the kitchen table for 9am.

Most of the morning was taken up preparing for the virtual sitting Tynwald along with responding to correspondence etc.

At 14.30 the Tynwald sitting got underway with a Covid-19 statement by the Health Minister, David Ashford, MHK. One particular motion relating to the “Emergency Powers (Coronavirus) (Entry Restrictions) (Amendment No. 2) Regulations 2020 certainly generated a long debate amongst the Tynwald Members.

The sitting finished at around 19.15 and once I caught up with a couple of things I was able to finish just before 20.00.

Just before finishing my comments for Tuesday, I do wonder how many people are aware of the event that unfolded on 14th April at 11.40pm; maybe I should add a further clue and say 1912?

You will know once I tell you: it was on that time and date that the luxury liner RMS Titanic hit an iceberg before sinking three hours later and killing 1,517 people.

Not sure when my fascination with RMS Titanic started, but it is one of those events that has intrigued me for many years, along with the assignation of JFK, death of Princess Diana and the suicide of Marilyn Monroe, to name a few.

Over the years I have been fortunate to have followed a lot of the Titanic’s maiden voyage over that fateful year, including visiting the Fairview Cemetery in Halifax, Nova Scotia which is the resting place for around 212 victims, 42 of which have never been identified.

I still personally go with the theory that the ship had a fire in coal bunker 6, which actually started in Belfast. This might also explain the reason why the ship was going so fast at the time of hitting the iceberg as it desperately tried to burn the coal onboard.

Anyway, a brisk 5.5 mile walk early on Wednesday morning before starting work at 9am, other than returning several calls I was able to take a couple of hours off to do some shopping etc.

Mid morning news broke that two more Manx residents had lost their lives to Covid-19. Both were male with underlying health conditions and passed away at Noble’s Hospital, which is extremely sad news, and unfortunately one of those individuals was an Onchan resident.

My thoughts and prayers are with their family and friends in this extremely difficult period.

At 14.00 there was a Visit Isle of Man Agency meeting, which was the first formal meeting of the board since the outbreak of Covid-19. The meeting lasted a couple of hours as board members discussed how Covid-19 has certainly affected individual sectors within the island’s tourism industry.

I know one thing is for certain, the recovery of our tourism sector will be very difficult and it will be a long road to recovery, especially as we will have to almost certainly start from scratch once again….

Late on Wednesday afternoon the first 29 island residents that have been stranded in the UK, Europe and across the world arrived back onto Manx soil before being transferred with a police escort to the Comis Hotel, which has also been fenced off.

At 18.00 there was a joint meeting between the DfE and Treasury teams, in order to discuss how the island will recover from this Covid-19 pandemic.

That meeting finished just before 19.00, which enabled Ellen and me to head out for another short walk.

Thursday also started with a quick 4 mile walk on the promenade before getting into the office for few hours, in order to prepare for the various meetings that will be held over the next week or so, along with starting to look at next week’s Tynwald sitting.

Late morning I had to deal with various correspondence received from hotels that are seriously being affected by the current “Lockdown” situation, along with returning a number of calls.

A number of key decisions will have to be made over the next few weeks and months in respect of our Serviced and Non Serviced Accommodation sectors, and some of those decisions will certainly be unpalatable either to the hotels who will feel the support is not sufficient or for the wider community who will continue to feel that too many resources are being given to the island’s tourism sector.

The number of messages and correspondence I am receiving has increased again this week after various businesses and individuals are being turned down for financial support, which is certainly frustrating me as an MHK, because we were supposed to be removing some of the barriers, in order to help those businesses that are in genuine hardship, along with individual employees.

At 14.00 there was a joint presentation given by Treasury, DHSC and DfE to Tynwald Members, which was a repeat of the earlier meetings that I was part of, but this time in the company of all Tynwald Members and Senior Government Officers.

An excellent presentation with lots of questions asked around the recovery stage as this island tries to get back to some form of normality. That lasted a couple of hours, but I still needed to return a number of calls before finishing.

As for Friday, Ellen and I set off on the road from the house just after 6am for the start of an 8.7 mile walk in our local area, which took us around 2 hours 20 minutes.

I think this week I have walked somewhere between 25 and 30 miles, but I am genuinely enjoying hitting the roads once more.

I still managed to start work for 9am and throughout the morning I had to deal with various questions, messages and phone calls from Constituents, especially from Manx residents that are currently working “Offshore”.

I also had to deal with a couple that have found themselves sleeping in a camper-van, which is fine at the moment but the weather will change soon. That particular situation involved calls and messages, but hopefully they should be sorted now until the end of May.

At 11.30am there was a DfE tourism meeting in order to discuss a particular thorny issue which the Department will have to address over the next few days.

I am sure full details will be put into the public domain early next week once the statement has been issued.

Friday afternoon was spent at the kitchen table looking at a couple of projects, but I was able to spend an hour or so in the garden enjoying the sunshine.

Just before finishing, the latest Covid-19 information confirms that more than 147,500 people have died from the virus so far across the world. In the UK there are more than 147,500 cases of Coronavirus and sadly more than 13,000 have lost their lives to this horrible virus.

As for the weekend, I have my virtual Political Surgery on Saturday morning from 9.30am and I will need to continue working on the Tynwald Order Paper for next week.