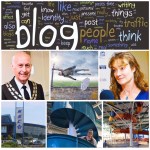 You never do get two days the same in this role, last week seemed quiet and peaceful and this week there simply weren’t enough hours in the day to do everything….

It certainly didn’t help that Boardpad, the app which holds most of the Department and Tynwald papers electronically, was down all weekend. This meant I was unable to access the agenda packs for either the DfE Department meeting or for the Public Accounts Committee meeting being held on Wednesday over the weekend.

Talk about bad timing, because these two agenda packs had over 900 pages of information that I needed to get through before Wednesday morning, especially when my mind is already on preparing for the budget next week.

That said, I thank the GTS team for ensuring that Boardpad was working again late on Sunday evening, which enabled me to get an early start on Monday morning.

As for last weekend, the island was battered by storm “Ciara” with severe gale force winds up to 70 mph in places, together with heavy rain.

The Ben-my-Chree sailings were also cancelled and flights delayed, especially on Sunday and again on Monday.

This gave me the perfect opportunity to spend a few hours on Saturday and Sunday going through various department papers that required careful thought, especially one particular paper on motorsport.

I also continued to work through the 2020 Budget information.

Early start on Monday for the reasons already given, but I still went into the office for normal time to start working on my budget speech, which will take most of the week to complete.

Just before 10am I had a meeting with the Director of Motorsport and it was definitely one of the toughest meetings we have had over the last three years, especially when the costs for putting on these specialist events increase year on year.

Our motorsport team within DfE works tirelessly to generate additional income and they do an amazing job to ensure these events actually take place each year, along with an army of volunteers – it’s just a shame that we are not getting the right level of funding at times to reflect the true exchequer benefit and the overall benefit that these events generate for the Manx economy.

It is also concerning that more and more road events across the UK, Ireland and in Europe are disappearing from the race calendar, which just underlines the pressure that the motorsport team is under to deliver these events.

The next hour was spent having an initial looking at the Bank (Recovery and Resolution) Bill 2020 that went before the House of Keys on Tuesday for its first reading.

At 12 noon I headed up to the Barrool Suite for a presentation on the Bank (Recovery and Resolution) Bill 2020, which was being led by Bill Shimmins, MHK. It was another excellent presentation on a piece of legislation that will need careful consideration especially during the clauses stage.

That briefing lasted just over an hour, which gave me just enough time to send a couple of emails before heading into Onchan for two Constituent meetings. The first meeting related to Noble’s Hospital and the second meeting related to a planning application, which appears to be taking a long time to go before the Planning Committee.

Back to the office briefly before leaving at 17.15, but once home I continued to work on my budget speech, along with trying to catch up with correspondence and to go through the DfE agenda papers until around 22.30.

Unfortunately, this meant that I had to give my apologies to Onchan District Commissioners as I was unable to attend our quarterly meeting on this occasion.

In the office for normal time on Tuesday, in order to start going through the Public Accounts Committee agenda papers, which had over 500 pages of information. Just before 10am we headed down to the House of Keys for this week’s sitting, which was again a relatively light agenda.

Just 7 oral questions and 4 written questions for answer before the Bank (Recovery and Resolution) Bill 2020 received its first reading. The Council amendments to the Children and Young Persons (Amendment) Bill 2019 were also considered, but the whole sitting was over in an hour.

Back to the office to continue working on my budget speech for the next couple of hours before heading up to the Barool Suite at 13.00 for a presentation by Daphne Caine, MHK relating to her Private Member’s Bill on the Divorce, Dissolution and Separation (Isle of Man) Bill.

Although I thought the presentation was excellent and informative, I certainly left the briefing wondering if no fault divorces on the Isle of Man in future actually meant no fault divorces!

That said, anything is better than the current process for the grounds for divorcing when a marriage has irretrievably broken down, in which one of the following factors as to the be proven – 1) adultery, 2) unreasonable behaviour, 3) desertion for 2 years, 4) separation for 2 years and both parties consent to a divorce or 5) separation for 5 years when of the parties does not consent.

Based on the responses received via the recent public consultation, I think most people are in favour of no fault divorces, but I would still welcome any views from Onchan Constituents or the wider Manx Public.

The rest of the afternoon was spent in the office until around 17.15, and once home I still needed to go through some of the Public Accounts Committee agenda pack, various emails and the couple of Department papers, along with ongoing research for the budget before eventually finishing at around 23.00.

In the office before 8am on Wednesday for a full day of meetings, but the first hour was spent at my desk working on my budget speech and the rest of the PAC agenda pack. Just after 9am I headed over to DfE for the Minister and Political Members meeting before the Department meeting and Agency Chair updates.

With a heavy agenda paper and a couple of difficult decisions, the meeting didn’t finish until 13.00. From there it was straight over to the Legislative Building and the Barrool Suite for a presentation by the Isle of Man Visit Agency, which gave a sector update and future objectives to Tynwald Members.

Unfortunately, I was only able to stay for part of the briefing as I needed to return a couple of calls before attending the Public Accounts meeting that got underway at 14.00.

The meeting lasted almost three hours and I left the office just after 17.10, in order to head home, get changed and be at Onchan Commissioners for 18.00 for a reception for long-serving Commissioner, Derek Crellin who has served 20 years on the board this year, plus a further 20 years in the Isle of Man Constabulary.

It is fair to say that Derek and I have crossed swords many times during my four years as an Onchan Commissioner, but 20 years’ service to the people of Onchan certainly needs be applauded.

On Thursday it was a day in the office desperately trying to get through the Tynwald Order Paper ahead of next week’s sitting. I also continued to work on the budget and needed to draft several letters, along with dealing with a large number of Constituency enquiries.

A couple of them related to a medical case and one is an absolute curve ball, which I will review after Tynwald.

I continued to work on various things until around 21.30 on Thursday.

As for Friday, in the office for normal time, which gave me just a few minutes to start writing a letter to a former MHK. Just before 9am I drove to the NSC as the Environment and Infrastructure Policy Review Committee were meeting with the Isle of Man Swimming Association with regards to the refurbishment works that have certainly caught the media’s attention over the last 12 months.

We then had a tour of the facilities by officers from the Department of Education, Sport and Culture, which gave us an opportunity to ask various questions around the works undertaken.

I left the NSC at 11.10 am to make my way to Manx Radio to do an interview on the latest Festival of Motorcycling tourism numbers.

I then went to DfE for a Department workshop on Locate.im and the Douglas Promenade scheme.

I finally got back to the office towards 14.00 to finish drafting a few letters and start catching up with emails etc, along with going through the Tynwald Order Paper.

Unfortunately, I had to give my apologies to the Southern 100 Club that I would miss their launch evening, because I still had so much to do, especially when I have a Political Surgery on Saturday morning between 10am and 11.30am and the Southern 100 Dinner in the evening, not forgetting trying to go through the rest of the Tynwald Order Paper before Tuesday.