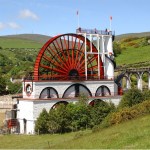 Laxey Wheel is unlikely to turn this year.

The Lady Isabella needs extensive repairs before being able to operate again and funding to fix the structure is not agreed.

Garff MHK Martyn Perkins is concerned one of the Island’s iconic assets has been allowed to get in a state of disrepair.

He blames a lack of ongoing maintenance: