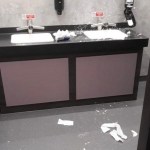 Politicians, police and youth groups are all needed to help tackle antisocial behaviour in Onchan, according to the region’s MHKs.

The issue has been under the spotlight after toilets in Onchan Park were vandalised days after being refurbished.

Other unsavoury incidents in the village include similar damage at a sports club in February, and a disturbance linked to the death of an elderly woman last year.