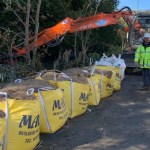 A clean-up operation is under way on the Isle of Man after severe flooding left people trapped in their homes.

The village of Laxey was cut off when the river burst its banks on Tuesday leaving several homes under 6ft (1.8m) of water.

One resident said the flooding was “an unmitigated disaster that could have been prevented”.

Chief Minister Howard Quayle said an action plan was being drawn up to “ensure it doesn’t happen again”.

Infrastructure minister Ray Harmer said the “massive clear-up” would continue in the village “for the next day or so”.

A major part of the works was removing trees and debris from the river to prevent more flooding in the immediate future.

Extra sandbags were also delivered and skips provided for residents to dispose of flood-damaged flooring and furniture, he added.

Although it was too early to say what long-term measures would be put in place, the government was taking “a number of actions”, added Mr Harmer.

Home affairs chief executive Dan Davies said debris was being removed from the river and roads and help was being offered to residents.

“It is really about supporting people to get back in their homes,” he said.

“If they are vulnerable, health and social care will be on the scene helping people out.”

Charlotte Morgan-Jones and her family were stranded in their home for several hours.

The mother-of-two said the moment water surged through the village was “scary”.

“It was literally like something you see in movies,” she said.

“My husband was outside putting out sandbags, the next thing all I heard was shouting and screaming and the water was coming in the front door.”

At Laxey Woollen Mills, staff “had to work hard to get it all cleared”, said master weaver John Wood.

“The flooring will need seeing to in a couple of weeks when it’s all dried out a bit,” he said.

“I’m sure there’s going to be quite a lot of work, but it’s nothing compared to what other people have.”

Resident Debbie Corlett recalled the moment a second breach in the river wall was made to release the flood water back into the river,

She said it was “like a plug being pulled”.

“I could hear a big cheer up the road. It abated very, very quickly because it could get back into the river, which is where should have been in the first place,” she said.

“It was all very surreal.”

Mark and Tracey Young are back in their home in Laxey assessing the damage caused by the flood.

“It started raining early… [there was] a little bit of rain and then the wall just collapsed and it was like a tidal wave,” said Mr Young.

Some residents reacted angrily to the situation, including Richard Kneen who owns a property on Glen Road.

He said work being carried out on the river was a “totally unnecessary project” and management at Manx Utilities should be held accountable.

“The whole thing was an unmitigated disaster down here that could have been prevented,” he said.

“Heads should roll for this, there’s millions of pounds worth of damage.”

While he said he had been “lucky”, Mr Kneen said others had been “absolutely devastated”.

Flooding occurred on Tuesday when the swollen River Laxey burst through a gap in a parallel wall which had been opened to repair a weir.

More than 100mm (4in) of rain fell within a 20-hour period, with the heaviest downpour occurring in the early hours of Tuesday morning, said The Met Office.

This “very localised” rain fell mostly on the northern side of the Snaefell Mountain, which drains into the Laxey River, a spokesman said.

Manx Utilities chairman Alex Allinson apologised to those affected and said an “urgent meeting” had been called by Chief Minister Howard Quayle.

He said a “combination of factors” were responsible including debris causing a build-up of water which led to a “surge”, he said.

The repair work had been due to be completed by the end of September but delays meant it had been extended for a week.

He said a “full analysis” was under way.

Chief Minister Quayle, who visited the village and spoke to some of the residents affected, said the government would be examining all possible factors.

“We need to get to the bottom of what had caused the problem, fix it, and ensure it doesn’t happen again.

“We’ll be putting in place an action plan to make sure that the chances of this happening again are as remote as possible.”

Meanwhile, members of a parliamentary scrutiny committee have written to the government asking for “an urgent overview of events” that unfolded in Laxey.

Rob Callister said: “We want to establish the facts. There are a lot of angry residents that need answers quickly.”

The Mountain Road reopened overnight but is currently closed to allow safety work, the Department for Infrastructure said.

Laxey and Dhoon primary schools which were closed during the flooding have reopened as normal, the Isle of Man government said.

It is the second time in four years the village of Laxey has been hit by flooding.

In December 2015, heavy rain led to part of a road bridge over the river being washed away.