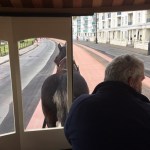 The figures were revealed by Infrastructure Minister Ray Harmer, in written answers to questions from Rob Callister MHK in the House of Keys this week.

The cost of running the horse trams across the festival totalled £2,174.40, in order to pay staff.

Meanwhile, it’s thought 1,439 people used the shortened, 500-metre service from Strathallan to Switzerland Road, at a cost of £1 per head.

The horse trams were only reinstated for the new summer season on Saturday, 25 May – after what Mr Harmer described as ‘unforeseen delays’ following ongoing refurbishment works along the promenade.