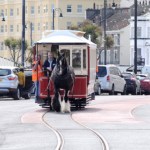 The horse tram season has been cut short to “support the progress” of the £25m Douglas Promenade refurbishment, Isle of Man Transport has said.

This year’s season, which started a month later than planned, had been due to end on 3 November.

The trams had been running on a reduced track this summer.

Rob Callister MHK, who had called for the services to be suspended next year, said it was “the right decision”.

He added: “It will allow traffic flow on the promenade to improve and give greater access to businesses.”

A spokesman for Isle of Man Transport said staff and volunteers would continue to offer stable tours.

Mr Callister said the running of the services this year had been “to the detriment of businesses”.

The government should “seriously consider stopping them” during the duration of the promenade works, he added.

The project, which is due to be completed by October 2020, is currently about nine weeks behind schedule.

An Isle of Man Transport spokesman said further discussions would take place about how to proceed with the horse tram season in 2020.

He said: “Flexible arrangements may be considered with regard to the length of the season and track distance.”

The future of the horse tram service, which has been operating for more than 140 years, was secured in November 2018.