Competition Bill to return to Keys 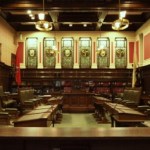 Proceedings had been halted due to ‘confusion’

The Competition Bill is to return to the House of Keys next week (Tuesday, 30 March) after it was halted by confusion on Tuesday.

The bill aims to prevent against unfair competition if a firm has a dominant position in a market.

The clauses were being debated when an amendment, from Onchan MHK Rob Callister, couldn’t be clarified.

It’s now thought at some point during the process the amendment numbers had changed.

Speaker Juan Watterson says a solution has been found but insists stopping proceedings this week was necessary: