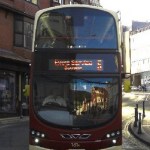 Rob Callister says improving the bus links around the Island from Ronaldsway Airport is something that needs to be explored.

When Tynwald sits on Tuesday, he’s seeking more information on the capacity for bus travel during TT.

The Onchan MHK is putting a question to Infrastructure Minister Ray Harmer.

Mr Callister says the number of those heading to the Island during the busiest period of the year means it’s important for (sic).