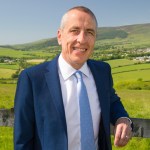 Bill Shimmins MHK has made a stinging criticism of the numbers behind the Area Plan for the East as ’completely bonkers’.

He has pointed out that the Cabinet Office has stuck to its figure of 2,440 houses being needed in the east of the island, despite the fall in the population in 2016.

The 2016 interim census showed the population had fallen by 1,183, with a large percentage of that drop being young workers leaving the island.

Under its original plan for the east, the Cabinet Office said that the island needed to build 2,440 new homes in the east. Mr Shimmins called that ’hopelessly overstated’.

Since the 2016 census, that figure has now been reviewed and brought down to 1,357 new homes, but the government is still working to the 2,440 number, planning to indefinitely designate some zones as ’strategic reserves’.

We previously reported that Mr Callister pointed out that, since 1951, the population has grown by only 29,000.

He accused the Cabinet Office of being ’absolutely wedded to the strategic plan, regardless of the reality of our population figures’.

And he added: ’The Cabinet Office is now admitting we only need 1,357 units, but we’re still going to plan for 2,440, my views is that is completely bonkers.’

Mr Shimmins said the plan for strategic reserves had left people ’feeling like their homes are blighted’ and that there was ’no clarity on when they’ll be brought forward’.